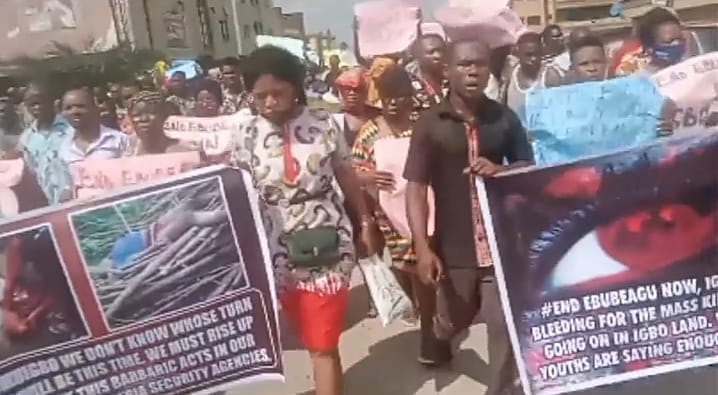 The current wave of insecurity in the South-East has attracted the attention of youth leaders who today embarked on protest against the Ebubeagu security outfit in Aba, Abia State.

“In Imo state, the protest will not stop until the Governor Hope Uzodinma resigns as governor of the state,” the protesters vowed.Related News Gov candidate decries poor healthcare system in Abia Gunmen kill seven during shooting spree in Imo Imo community women protest killing of youths Speaking, Goodluck Ibem, the President General of COSEYL said, “The Enugu – Port Harcourt expressway mainly the boundary between Abia and Imo state have been taken over by Fulani terrorists and kidnappers who kidnap our people on daily basis and nothing serious have been done to arrest these criminals committing such atrocities on Igbo soil.“Ebubeagu killed 21 innocent youths returning from a traditional marriage in Awo Ommamma village in Oru East Local Government Area of Imo State accusing them of being bandits whereas the real criminals who are the Fulani Jihadists and terrorists are left unchecked in the zone.“It is now a crime to be a youth in Imo State as our youths are now killed at random”.

COSEYL said, they are taking the protest to Imo State after Aba “because Governor Hope Uzodinma have committed so much crime against humanity with Ebubeagu security outfit.2nd August 2022 Protesters.