Man arrested after dog attack and assault in Derbyshire town

Rihanna Just Passed Off Her Denim Thigh-High Boots as Pants

Blueprint for how the ACC survives the expansion wars: But it won't be easy

How Rich Are President Joe Biden, VP Kamala Harris and the Wealthiest US Politicians?

How should we adapt to climate change?

Racine man accused of assaulting a woman and stealing around $13,000 from her

Our Shakespearean love affair with BMI

Sellers of two Newport Coast mansions seek over $60 million each

‘You get one life, you enjoy it responsibly, then you die’ 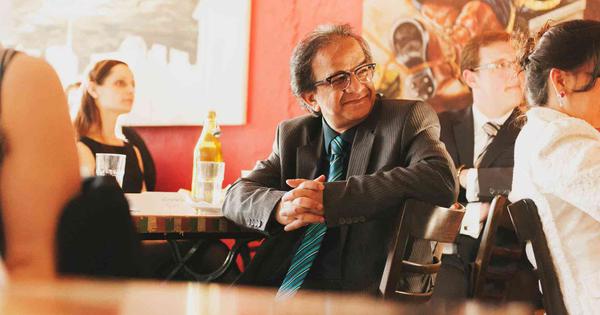 Mumbai journalist Mayank Bhatt, who moved to Canada in 2008, passed away on August 1. He chronicled the progress of his illness on The Beacon.

” Illness as Metaphor, Susan Sontag I am gripped by a general sense of sadness, which is not fear or pain of dying, or the pain of leaving behind my loved ones.” Illness as a Metaphor, Susan Sontag I began journaling my journey as a cancer patient because I believed and believe that I was and am going through what is unarguably a treacherous phase in my life that will culminate in my death.

As Indian women team create history, here’s what you need to know

‘India’s growth is insufficient for the kind of jobs it needs,’ says Raghuram Rajan

Can prayer and medicine work together to cure those who suffer?

Why did Sumatran kings once build a Buddhist monastery in Tamil Nadu?

‘India Out’ protests in Maldives were based on misinformation, says senior diplomat

As the country turns 75, it faces a decay of its institutions

‘An act of asserting and reclaiming identity’

Taiwan president vows not to back down over Chinese threats, Nancy Pelosi pledges US support

Behind the scenes of Krishand’s award-winning experimental Malayalam film

Hermit or prince in disguise? This novel explores a historical mystery from Bengal through fiction

Cannot evict people with bulldozer at doorstep without any prior notice, says Delhi High Court

Why is India losing an alarmingly high number of young mothers to suicide?

Partha Chatterjee, his aide to remain in ED custody till August 5 in teacher recruitment scam

ED has called me for questioning while I am in Parliament, Mallikarjun Kharge tells Rajya Sabha

‘Writing is the most painful, challenging and fun part of filmmaking’

Journalist Siddique Kappan had no work in Hathras, says Allahabad HC while rejecting his bail plea

Packs of stray dogs are attacking blackbucks and other wildlife

If Pope Francis retires, what would that mean for the future of the papacy?

Delhi HC rejects Ramdev’s clarification on Coronil, says it seems like a ‘pat on your own back’

Assam’s final NRC was published in 2019. So why does it need a new NRC coordinator?

What are the costs of India’s high public debt levels?

Rahul Gandhi says there is no democracy in country today, alleges RSS is controlling institutions

More of the same about Kota’s competitive coaching class culture

RBI raises repo rate by 50 basis points to 5.4% as inflation is expected to remain high

Jyothi Yarraji, India’s record-breaking hurdler who loves to rise after a fall

The films by Pa Ranjith and Chimbudevan stand out

Was there ever an Akhand Bharat? Can there ever be one? This book examines the question

How true is the health minister’s claim that India meets WHO guidelines?

India’s lower courts are sitting on 4 crore cases. Filling judicial vacancies must be a priority

Voting begins to elect next vice president of India

Why Jhumpa Lahiri says translating herself is ‘bewildering, paradoxical, doomed from start’

Will the UN declaration spur countries to finally act?

Man booked for abusing and assaulting woman in Noida

Civilian killed in gunfight in Kulgam

Restrained by the pandemic, Indian dancers are exploring a new creative frontier

Three Indian-origin authors make it to the longlist

The story behind the disfigured ghostly sculptures in Thai cosmological parks

Is ‘structured water’ better for your health? A chemist explains why the claim is nonsense

Photojournalists take massive risks to report the news – but is the Indian media snuffing them out?

Madras High Court ruled that a temple was a Buddhist site. How will this impact mosque-temple cases?

‘Confidentially Yours’ is a delightful comic mystery

Why are Earth’s days getting longer? Scientists are still looking for the answer

What is ‘Medical Feminism’ and does how it affect the lives of women in the US and India?

Neeraj Chopra’s mighty 87.58 for javelin gold is something we can all be thankful for

Despite contributing a fifth of Pakistan’s GDP, Karachi still gets short shrift from the government

Why has India's powerful judiciary failed to check Modi?

ISRO mission fails as satellites are placed in wrong orbit, and 9 other top stories

Monkeypox is overwhelmingly affecting gay and bisexual men. What do they need to know?

In times of distress, the scheme can help women but it must adapt to extreme weather

What explains rising global authoritarianism? The history of constitutions has some answers

Why does such a small number of Indians pay income tax?

Study finds 0.3% of questions raised in 20 years were about climate change

Kapil Sibal’s remarks saying he has ‘no hope left in SC’ are contemptuous, says Bar Association

‘After Sappho’ reimagines the lives of queer artists and activists, from Sappho to Virginia Woolf

As floods and erosion consume river islands, thousands are being left homeless

Monsoon session of Parliament ends four days ahead of schedule

A new book goes into the heart of Bastar, Chhattisgarh, where adivasis still await ‘aam azadi’

After Maharashtra, is Jharkhand next? ED action steps up pressure as ruling coalition shows cracks

Google says it has removed one ‘objectionable’ link about Smriti Irani, her daughter

The reasons why Pakistan turned out different from India and Bangladesh

What makes the ‘Hitopadesha’ a timeless text on human behaviour? It is its playful language

Championing democracy abroad, hollowing it out at home

The organic intellectual, mystical poetry, and the rationalist tradition in India today

Hindus, Muslims hurl stones at each other during Muharram processions in Bareilly, Varanasi

Is Rishi Sunak lagging behind in the UK leadership contest because of his race?

From Mirabai Chanu to Avinash Sable, a recap of India’s 61 medals at Birmingham Games

The groundbreaking feminist magazine first hit the streets 50 years ago

Will the Centre’s change in forest conservation rules affect the Chhattisgarh movement?

If being casteless is impossible, can freedom be possible?

The transitional justice bill, the only one of its kind in South Asia, is being undermined

A regressive ode to brotherly love

Amit Panghal shows signs of his best with one-track mind

India’s answer to MAD magazine, which produced some of the finest comic strips, has been forgotten

Nitish Kumar to prove majority in floor test on August 24

Does true love require self-sacrifice? This is where the philosophers come in

Issey Miyake changed the way fashion is made, seen and worn

A Union minister told Parliament that 73% of India’s solid waste is processed. How true is this?

Arvind Kejriwal has given a ‘perverse twist’ to debate on freebies, says Nirmala Sitharaman

How will the Election Commission decide which is the real Shiv Sena?

Jeffrey Epstein and the dark side of marketing

Labourer from Bihar killed by suspected militants in Bandipora district

Action on scrapping of Anti-Corruption Bureau will be based on BJP poll manifesto, says Karnataka CM

When will Pakistan realise its economic potential?

The wet, cold Britain climate is changing – and that’s a problem

One year after Taliban takeover, Afghan women are still resisting curbs on their rights

How refugees from Sindh rebuilt their lives – and India – after Partition

Will the Manipur government’s order help conserve it?

How are freedom and democracy reflected in Hindustani music practice?

What would our forests say about being the ecological property of the nation-state?

Attack on Salman Rushdie is an assault on freedom of expression, say writers and politicians

The stories that are common to the Qurʼan and the Bible

The courage and necessity of Salman Rushdie

Why it is important to accurately track and measure emissions