Demand For Leave-In Conditioners In The Global Market Is Expected To Close In On A Valuation Of US$ 2.4 Bn In 2021

Not on the radar of bulldozers, Delhi's illegal factories are ticking time bombs

Who let the penguin out?

Emefiele: Why CBN governor’s refusal to step down for the presidential race is no surprise [Pulse Contributor's Opinion]

Kentucky Derby winner pulled an upset. Can Indiana Senate nominee do the same?

7 Tech Stocks to Buy on Any Dips

Millennials are Expected to be Most-Sought after Consumers for Flavored Syrup Market – Fact.MR Study 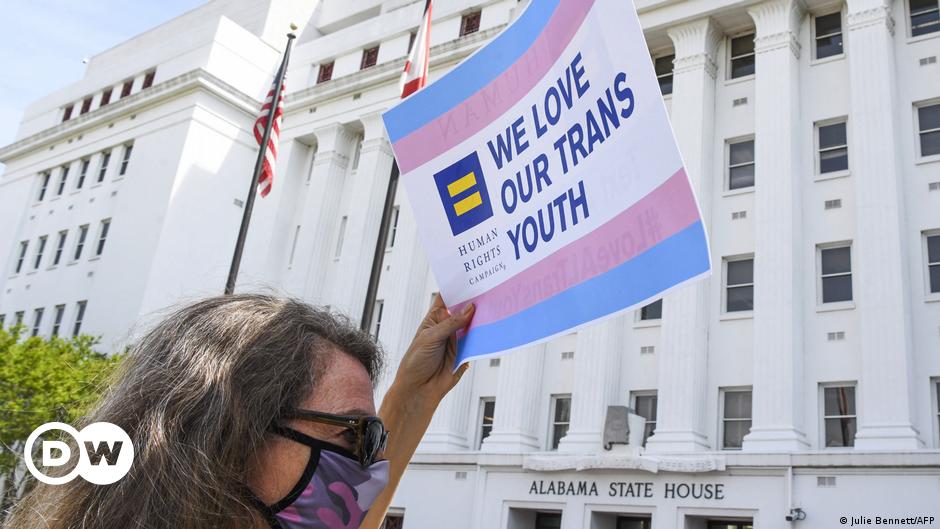 An Alabama ban on the provision of gender-affirming medication for minors has been blocked by a federal judge. Transgender rights have become a bone of contention for right-wing Republicans.

The Vulnerable Child Compassion and Protection Act came into effect in the southern state on May 8, not only banning medication treatments for gender dysphoria but also gender-affirming surgeries.In his ruling, Burke said that "the uncontradicted evidence is that at least twenty-two major medical associations in the United States endorse transitioning medications as well-established, evidence-based treatments for gender dysphoria in minors."Parents have a fundamental right to direct the medical care of their children subject to accepted medical standards," Burke said, adding that "discrimination based on gender non-conformity equates to sex discrimination." The law, introduced by Republican lawmakers in the traditionally conservative state, is part of an ongoing battle over the recognition of transgender rights in the US.

The slate of legislation against transgender rights has coincided with increasing limitations on abortion rights in some US states.The US Department of Justice, as well as several families with transgender children, have challenged the law, calling it a violation of equal protection and free speech rights, as well as an intrusion into a family's right to make medical decisions.

Ukraine: Pro-Russia leaders plan to ask Putin to annex Kherson — as it happened

Finland must join NATO ′without delay,′ its leaders say

The devastating impact of drought in Kenya

NATO: New challenges for the alliance as Finland and Sweden inch closer to membership?

Who was Ukrainian philosopher Hryhoriy Skovoroda?

Focus on Europe - Spotlight on People

Is pee the answer to global fertilizer shortages?

India to ramp up wheat exports amid global shortage

US corporations get pricked by thorny social issues

2022 IIHF World Championship: ′Like a World Cup without Germany or Brazil′

Are we flushing away the answer to our fertilizer shortages?

Japan: Why are there so few women in top managerial roles?

Could SARS-CoV-2 be modified to be become harmless?

Spain: No more masks, but a rise in infections

DW talks to scientist Yap Boum about COVID in Africa

Spain: Life on the lava

Is South Africa headed for a fifth COVID1-19 wave?

In Armenia, factchecking disinformation on politics and war

Ukraine: UN says 6 million have fled since Russian invasion — as it happened

US: Joe Biden hosts ASEAN leaders amid concerns over China

Veterinarians: From insemination to castration

Speak up! What your voice reveals about your character

The Woman who has Big Tech Worried

Safety inspection: a visit to Switzerland′s network of underground bunkers

Ira Peter: podcast-ambassador for a community in crisis

The perilous life of migratory birds

How cybercrime laws are used to silence dissent in Middle East

The Healing Power of Music

Eurovision contestants for finals are set

How FC Barcelona Femení became the best team in Europe

In Good Shape - The Health Show

Why are some fabrics so scratchy?

Opinion: In keeping with its 1939 tradition, Finland is saying ′nyet′ to Vladimir Putin

The centuries-old Oberammergau Passion Play is back

Bayern Munich′s Bundesliga dominance not a barrier to Asian popularity

Veterinarians: From domestic cats to lions and boa constrictors

Finding our way around Amsterdam

Russian soldier to be tried for war crimes in Ukraine

Veterinarians at work: From domestic cats to lions and boa constrictors

Mexico: Mafia and farmers caught up in lime crime

Lesotho: The deal with water

The World of Narendra Modi - India′s Path to Global Power

World Stories - The Week in Reports

Russians in Germany clash over the war in Ukraine

Did US intelligence-sharing with Ukraine cross a line?

A fresh perspective – the power of art

Curtains up: glitz, glamor and films galore in Cannes

Despite extremism, Djerba is model of integration

How NATO stands to benefit from Sweden, Finland joining

Humanitarian catastrophe is unfolding in Somalia

Volodymyr Zelenskyy meets with US Senate delegation in Kyiv

Multiple people shot at Buffalo supermarket in the US

Displaced farmers in Nigeria feel too afraid to return home

Ukraine says Russian forces withdrawing from Kharkiv — as it happened

US: 10 killed in shooting at Buffalo supermarket

Macron seeks to shore up support ahead of key parliamentary poll

Last show of Benin Bronzes in Cologne before their return

Tens of thousands in US march to protect abortion rights

How humanitarian aid makes its way from Germany to Ukraine

In Iraq, sectarian prejudice goes beyond the grave

Swiss voters back ′Netflix′ law and boost to Frontex funding

Russia is lagging behind its objectives, says NATO deputy secretary-general

NATO is ′prepared for all contingencies′

US: One dead, five wounded in California church shooting

Zelenskyy says he will call on support from Asia, Africa — live updates

War in Ukraine: tourism specialists tells of their experiences

Child labor on the rise in Africa

The volunteer driving to Mariupol to save civilians

Indonesia: Over a dozen killed as tour bus hits billboard

Sweden sends diplomats to Turkey for support on NATO bid

Anniversary of Okinawa′s return to Japan rekindles calls for independence

Japan declares coronavirus emergency after Okinawa US base outbreaks

Coronavirus and grief: The pain will never end

Losing a parent to COVID-19

US to ease visa, family remittance restrictions for Cuba

′Our relationship was the story′: Film Development Fund - Ethiopia

Dancing, drugs and death - The excesses of Berlin’s Club Culture

Ukraine′s Azov Regiment accused of having neo-Nazi past

Australians to vote in key election for global climate goals

In Ukraine, volunteers help the wounded

Inside the Dutch machine that can read people′s minds

Will the ′Islamic State′ benefit from the Ukraine war?

′Like hell′: An eyewitness recounts her evacuation from the Azovstal steel works

War in Ukraine: Its impact on Germany

Curtains up: glitz, glamour and films galore in Cannes

How can Ukrainian women find work in Germany?

Hong Kong: Why are Catholics worried over free speech?

Belarus: ′Attempted terrorism′ to be punishable by death

Hong Kong: Why Catholics are worried over free speech

How NATO weapons from Afghanistan are impacting Kashmir′s militancy

Why some young Swedes remain uneasy about joining NATO

Is Bangladesh heading toward a Sri Lanka-like crisis?

How can the West stop Russia′s food war in Ukraine?

News and current affairs from Germany and around the world

A voice for people with disabilities in India

Conflict Zone - Is Russia heading back into full-scale Soviet repression?

World in Progress: Iran′s history through the eyes of 93-year-old Mama Dschun

Shoot-out in Seville: Europa League glory for Eintracht Frankfurt after victory over Rangers

The Day with Phil Gayle: War Crimes Trial in Kyiv

Shootout in Seville: Europa League glory for Eintracht Frankfurt after victory over Rangers

Is Russia heading back into full-scale Soviet repression?

US natural gas price spikes as demand from Europe grows

WHO warns of 1 million new sexually transmitted diseases each day

One tiny company is wrecking the American solar industry – why?

Germany: One person injured in a shooting incident at a high school

Egypt: A Highway through the City of the Dead

Chinese military made in Germany: How China′s military uses knowledge from joint research with German universities

Chennai: One type of coal pollution we don′t talk about

Bringing a Saharan oasis back to life

We′re queer, We′re here - Fighting for rights in the Balkans

It was time for Europe ′to draw a line′: historian Christopher Clark

A doll that makes a difference

In South Africa, life is returning to normal

Opinion: Pitch invasions are pointless and dangerous - and not fan culture

From welfare recipient to entrepreneur in South Africa

In Uganda, telemedicine booms in the pandemic

Waiting lists for kidneys can be extremely long

In Colombia, nothing sells better than empanadas!

Did Omicron eliminate the Delta variant?

How to prevent chronic kidney disease

Why Argentina’s gap between rich and poor has grown

″We cannot turn our back to the rest of the world″

US Senate approves $40 billion Ukraine aid package — as it happened

What to know about Berlin′s Olympic Stadium

Tunisia protesters unite for democracy ⁠— but is it enough?

Mali soldiers on despite growing isolation

Economy and finance news from a German perspective

News and in-depth reporting from Berlin and beyond

′We cannot turn our back to the rest of the world′: Jutta Urpilainen

How is Pakistan′s military looking at worsening political crisis?

Germany to deliver 15 ′Gepard′ tanks to Ukraine in July

War in Ukraine: Is Germany losing its EU leadership role?

Monkeypox cases confirmed in Europe, US and Australia

How does Pakistan′s military view the political crisis?

The dark web: How it helps in the fight for human rights

How 3D models are used to visualize injustices

Saint Helena - A bastion of biodiversity

What to do when your digital COVID-19 vaccination certificate expires

We need to talk – about climate change

The best vegetable restaurant in the world

Sensation at the Oberammergau Festival

Prisoners of war from Azov: Do the fighters face the death penalty in Russia?

Opinion: Mariupol — a symbol of Ukrainian courage and Russian shame

News and current affairs from around the continent

Breaking out of Mariupol

RECOMMENDED — Germany has lost credibility for its historical relationship with Russia. Could that cost it its EU clout, too?

Strong Voices and Stunning Arias at the Opera Gala Bonn 2022

Ukraine: Diplomacy only way to end war, Zelenskyy says — as it happened

Breaking news and perspectives from around the globe

RB Leipzig′s first major trophy: ′The club belongs to the people who identify with it′