Pope Francis: It is a sin to use Christianity to judge and exclude

This is Why Texans Love All Things Texas 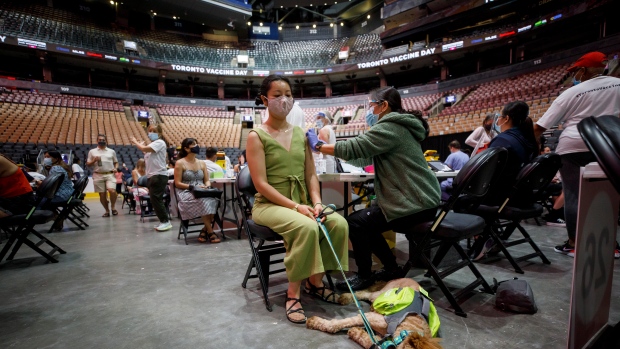 Toronto will hold dozens of vaccination clinics across the city this weekend, including late night pop ups at a bathhouse in the city’s gay village and in an apartment building in Cabbagetown.

” The clinics planned for this weekend will be held in schools and shopping malls, as well some more high visibility locations like Mel Lastman Square in North York and Trinity Bellwoods Park in the city’s west end.Here is a full list of the pop up clinics planned for this weekend:Eileen de Villa says that polling done by the city has continued to suggest that only about five to six per cent of the population identifies as vaccine resistant while a larger group – consisting of about nine to 10 per cent of the population identifies as vaccine hesitant.There will also be another series of vaccination clinics at TTC stations, including Sheppard West Station, Warden Station and Islington Station, and some clinics held in more novel locations like one slated for the Steamworks bathhouse on Church Street and another to be held in a TTC bus parked in Kensington Market.

“I will say if you count up both the number of clinics and events that are happening on these and if you look at the variety of what we're doing, subway stations, malls, schools, parks, right on the street, I think we are embarking on an effort that will have accessibility carried to a new level but done in a very targeted way because we are not choosing these locations by accident or just trying to spread it out across the city,” Mayor John Tory said during a press conference at city hall on Wednesday as he announced the details of the initiative.Tory said that unlike previous largescale initiatives, like a one-day clinic at Scotiabank Arena in which 26,000 shots were administered, the focus is now on “slow but steady progress.

The path out of the pandemic: COVID-19 exit strategies for the GTA at the ballot box

Toronto man shot dead may have been in wrong place at wrong time, investigators say

Ontario lays out exemptions where proof of vaccination is not required

'No more nonsense': Ontario Liberals call on government to get tough on anti-vaxxers

Here are all the places in Ontario named after Egerton Ryerson. Will they change their name?

'This is going to have widespread effects:' More than 57K Ontarians experience a post-COVID-19 condition

Ontario to be hit by early and brutal start to winter weather, forecast reveals

Richmond Hill Mayor Dave Barrow says he is stepping down

'The next few weeks are going to be disastrous,' employment lawyer says of Ontario's vaccine certificate rollout

'I could not believe what happened,' Niagara, Ont. cop who shot fellow officer tells court

'I could not believe what happened,' cop who shot fellow officer tells court

Long lists and climbing costs: The child care fix each party is pledging

Why should you get the COVID-19 vaccine? Your top questions answered

Father abducted after violent home invasion in Hamilton, Ont. that left one son dead and another injured has been found

Father abducted after violent home invasion in Hamilton, Ont. that left one son dead, another injured has been found

$616M Highway 427 expansion to open to the public on Saturday

Canadians switching to no annual fee credit cards to save money: survey

From guns and gangs to safer streets: How each federal party plans to combat GTA gun crime

Voting in the 2021 federal election in the GTA: Here’s what you need to know

Who are the Marinara Boys? How a love of food led to a community of Italian food joints

Ontario confirms the province will help Alberta with overwhelmed ICUs

When can I vote on election day? Our GTA voting guide

Homeless encampment clearings cost the City of Toronto more than $1.5 million this summer

Winning over workers: How the federal parties plan to create jobs as lockdowns lift

One man dies in hospital after triple shooting in Mississauga, police say

Parents at Ontario school create their own COVID-19 testing program

Ontario to be hit by early and snowy start to winter, forecast reveals

One person dead after shooting in Toronto

When can I vote on election day? A guide to voting in the GTA

Large street fight in Mississauga, Ont. leads to one dead, two injured and another in custody

Cyclist dead after falling off cliff at Toronto park

Will Ontario police forces be actively enforcing proof of vaccination?

How many is too many? Number of Ontario pot shops has nearly doubled since the spring

Long lineups form outside some polling stations across Toronto

'Armed and dangerous:' Police release image of suspect in stabbing on Toronto streetcar

Voting in the GTA: here's everything you need to know

Registration for fall recreation programs opens this week in Toronto

How to get proof of COVID-19 vaccination in Ontario

Markham, Ont. couple who disappeared on Saturday still not found

Why do we need a COVID-19 vaccine certificate program in Ontario?

Ontario youth to rally for climate action at Queen's Park

Ontario man battles with gas company after getting $1,000 bill because of faulty meter

Ontario increasing capacity limits for some indoor and outdoor settings

One person dead, two in life-threatening condition after collision in Brampton

Two people dead, one in life-threatening condition after collision in Brampton

Male victim in life-threatening condition after shooting in Etobicoke

Who gets September 30 off this year?

Toronto to vaccinate children five and up once approved, planning group formed