The SpeedHooked Meet: Back At It In Finland

Shooting at McDonald's investigated by GPD

Cardinals shut down Reyes due to shoulder soreness

Buddha Purnima: Buddhist monks from across world call for peace

G7, NATO and the intensification of the new Cold War

Sip and celebrate at the Nantucket Wine Festival 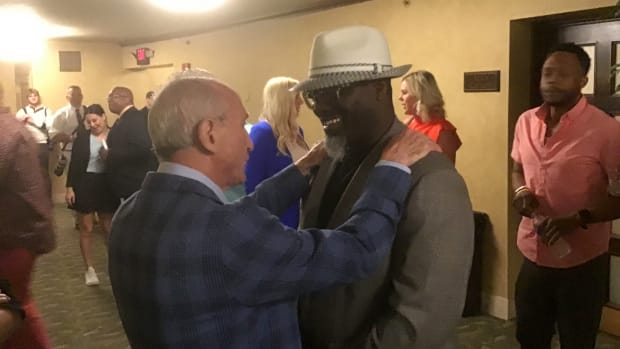 Huskers’ 1990s football ethos resurfaces at premiere of ‘Day By Day’ documentaryThe fading spirit of E Pluribus Unum, to which many generations of Americans once aspired, was very much alive at Lincoln’s Rococo Theatre on May 12, during the premiere of a new documentary about the glory years of Nebraska football under Tom Osborne.A

Jared Tomich’s wide-eyed young sons met teammates they had only heard their dad tell them about.Vershan Jackson with Jared Tomich and family | Tad Stryker photo The producers developed a now-familiar narrative, the stunning discovery of Tommie Frazier’s blood clots, which seemingly dealt another fatal blow to the Huskers’ endless futile quests for a national title, and paid homage to second-string quarterback Berringer, who rose to the occasion despite having to battle his way through the complications of a collapsed lung.Clinton Childs, Jared Tomich, Matt Hoskinson and Jackson quickly settled on their answer: Brown would win — and they acknowledged he looked younger than any of them.The crowd mingles before the permiere | Tad Stryker photo More Video from premiere night Wednesday: Tom Osborne interview Thursday: Jared Tomich interview Friday: Grant Wistrom interview More about the film Image: Daybydaymovie.

Huskers Fall to Hoosiers in Game One

Husker Dan: The 2022 Running Back Room

Baete Closes Second Round at Stanford

Baete Fires 69 in Final Round

Huskers Cruise Past Illinois in 11-2 Win on Saturday