A 'blood moon' total lunar eclipse is coming this weekend

Turn Your Podcast Into a Money Machine

Steve Stricker's lead at 3 going into finale at Regions Tradition 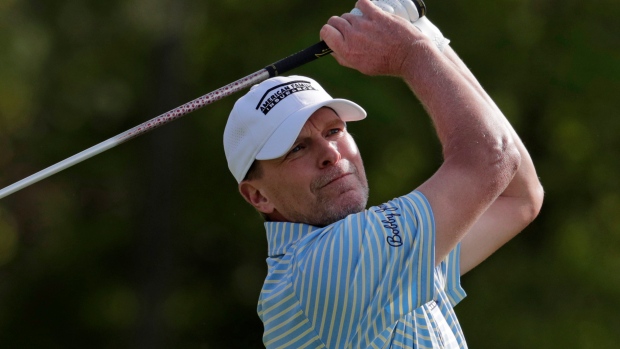 Stricker is seeking his fourth major championship on the 50-and-over circuit.A two-time winner this year already, the Charles Schwab Cup points leader is chasing his first major championship.Playing his third straight tournament after a six-month hiatus for health reasons, Stricker was at 17-under 199 as he seeks his second win in the past three tries in the PGA Tour Champions major at Greystone Golf & Country Club.Cejka was disqualified after a 66 Saturday for using a yardage book that had not been approved for the competition by the PGA Tour Champions Rules Committee.

2h ago Stricker's lead at three going into finale at Regions Tradition BIRMINGHAM, Ala.(AP) — Steve Stricker took a three-stroke lead over Steven Alker into the final round of the Regions Tradition, birdieing the final hole Saturday for a 6-under 66.

Less is often more for a struggling offence

Morning Coffee: 6 Of The 8 Stanley Cup Playoff First Round Series’ Are Tied 1-1

Poulin: Nothing better than the first round of the playoffs

Willis: Depth of Hurricanes allows them to continue to push the pace, ability to come in waves

Title-chasing Inter Milan recovers from 2 goals down to win

Hurly Long leads British Masters by one at halfway stage

Toronto FC, Whitecaps meet in Vancouver, both looking to get out of their funk

Jannik Sinner struggling under new coach ahead of Italian Open

You can only hope to contain them': Lightning aim to bottle up Auston Matthews, Mitch Marner again

Kassian: The Oilers were running into trouble in their own end on Sunday

May: Capitals are taking advantage of the Panthers mistakes

After great start, Carlos Alcaraz heads to Paris among favorites

Nadal likens his body to 'an old machine' at Italian Open

The NHL’s scoring surge continues early in the postseason

Feherty: I had a front row seat for Tiger's rise, and I have some behind the scenes stories to share

Mann: Frustrating knowing that we could have easily won both playoff games

'Need to get over:' Whitecaps want to right wrongs in Canadian Championship tilt

New lineups galore for next curling season in fresh quadrennial

McCagg: If the Sens don't get a top 5 pick I wouldn't lose any sleep

Thomas Bjorn to be European vice captain at 2023 Ryder Cup

Morning Coffee: Maple Leafs Now One Win Away From Second Round

Olney on the Blue Jays' slide, Garcia's ejection and a potential left-handed bat for the Jays

Leeds loses to Chelsea to stay in EPL bottom three

Ukraine returns to soccer field with friendly win in Germany

Smart: When a coach like Barry Trotz gets fired, all the pressure falls on the players

Steve Phillips on Berrios' struggles, Jays losing 4 in a row & Yankees on fire

Phillips on Berrios' struggles, Jays losing four in a row and Yankees on fire

Johnson: Canada's roster is better than last year when they won gold

Weeks: Greg Norman has made his bed with the Saudi tour

Ryan: It was surreal, lo and behold I got a call saying do you want be on this show and I said yes

The ball becoming the story of this MLB season

CFL, CFLPA are continuing to bargain on new contact

CFL, CFLPA getting closer to deal but no MOU signed yet

CFLPA says latest offer from CFL did not meet expectations

Rapids up home streak to 22 with victory over LAFC

No suspension for Flames' Nikita Zadorov for hit on Luke Glendening

Harper, Phillies continue to roll with win over Dodgers

Daniil Medvedev back on ATP tour after Wimbledon ban

AC Milan cusp of Serie A title win over Atalanta

Final round of LPGA Founders Cup delayed by fog

Memphis Grizzlies will spend to keep Ja Morant core together

Gaudreau the hero as Flames advance past Stars