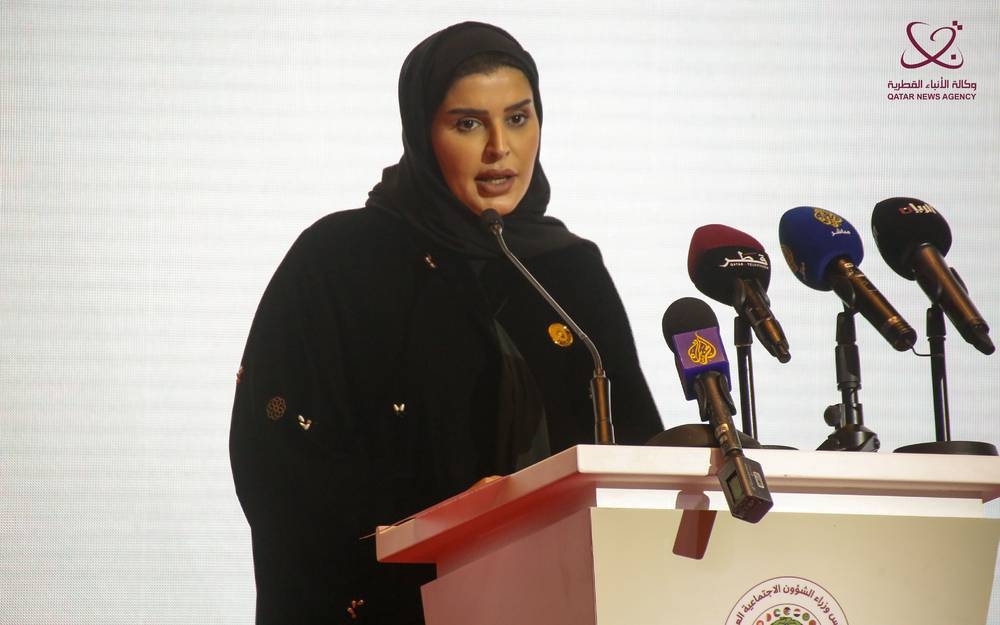 Qatar Social work pillar of advanced society, says Qatari minister 42nd meeting of Arab Ministers of Social Affairs QNA/Doha Last Edited January 26, 2023 | 12:31 AM HE the Minister of Social Development and Family Maryam bint Ali bin Nasser al-Misnad speaking at the meeting HE the Minister of Social Development and Family Maryam bint Ali bin Nasser al-Misnad affirmed that social work is the pillar of every advanced society, which seeks to achieve prosperity for its people, stressing that Qatar places humans at the centre of its attention and the basis of its development movement, as it believes that the human is the real source of wealth, the engine of history, and the builder of civilisations.She added that during the World Cup, we have learned that nothing could prevent us from achieving our aspirations and hopes, this historical event has inspired us to change the stereotype about social work, as it is merely charitable work, rather, it is a comprehensive development work that moves the citizen to a position of independence and the ability to produce, and to join the procession of development and growth.HE al-Misnad concluded by saying that today's meeting is evidence of the keenness of all participants to reach social work to its fullest goals, which contribute to human prosperity and ensure a decent life.This came in HE the Minister's speech at the opening session of the 42nd high-level meeting of the Council of Arab Ministers of Social Affairs, held under the theme 'the rights of persons with disabilities and multidimensional poverty: further implementation of the 2030 agenda for the sustainable development plan and beyond'.

Related Story Qatar assumes presidency of Arab social affairs ministers' council meeting Qatari banks’ loan books will 'remain strongest' in 2023: Moody'sShe said that the meeting held in Doha aims to overcome any obstacles or social challenges that may face groups of society, especially persons with disabilities, affirming that Qatar, under the leadership of His Highness the Amir Sheikh Tamim bin Hamad al-Thani, was keen to translate its pledges towards supporting the noble international efforts striving towards this goal, stressing that the eradication of poverty in all its dimensions is a priority for the country's efforts, based on Article 7 of the Permanent Constitution of Qatar, which emphasises co-operation with peace-loving nations.

Buying in realty, banking and industrials lift QSE above 11,100 points

Veggies and more at Mahaseel

Qatar Airways, QDF announce Avios can now be collected and spent at HIA

Ministry aims at providing quality education to all: official

'Everything Everywhere All' at Once tops Oscar noms

Minister of Labour meets Somalian counterpart, Director of Executive Office of Council of Ministers of Labour and Social Affairs in GCC

IPA Qatar releases ‘how to guide’ for setting up business, hiring and living in Qatar

The dynamic diplomacy of Qatar

India’s military and diversity on display at Republic Day parade

Qatar and Morocco conclude second round of FTA negotiations

Minister of Social Development and the Family meets Arab counterparts

Egypt’s Mohsen only Arab qualifier into next round

'Dadu on Tour’ initiative launched to reach communities beyond Doha

How Israel is creating deep divisions through psychic annexation

International Conference on Translation and Problems of Interculturalisation begins

How to resist neo-colonial domination and apartheid

Support for SMEs is good but can be improved

International Conference on Translation and Problems of Interculturalisation concluded

President of Police Academy: Police College's great achievements made it most fastest-growing, distinguished in region

Police among 47 dead and 150 wounded in Pakistan mosque blast

US embassy to celebrate Black History Month through film and literature

Everyone loses in a fractured world