Not totally above board

PM Modi to inaugurate Rs 9,802 crore Saryu Canal project in UP on Dec 11

Raekwon on His Dad Addicted to Heroin, Meeting Him Only Once at 6 (Part 1)

PM pledges to help with phase 2

Omicron cases present in at least 15 US states 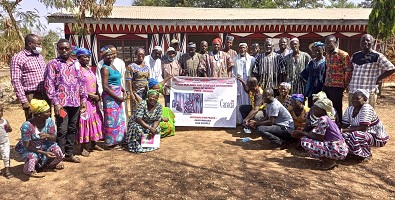 Naba Akwara III observed that traditional rulers are the custodians of the people and command respect in their respective jurisdiction and have the power to deal with conflict management and resolution instead of security agencies.The paramount chief indicated that in the past, traditional rulers had the power to deal with conflicts before they explode and attributed the inability to resolve such conflicts now to the infiltration of foreign culture which has being affecting the Ghanaian traditional system.He stated that to help address this challenge, there was the need for government particularly, the MDAs to use the traditional council as a channel for resolving such issues instead of relying on the security agencies and spending huge sums of money in resolving conflict which the traditional rulers have the powers to deal with.• Stakeholders after the peace workshop The Paramount Chief of the Sirigu Traditional Area in the Upper East Region, Naba Atogumdeya Roland Akwara III, has  bemoaned the huge sums of money Metropolitan, Municipal and District Assemblies often spend on the security agencies in maintaining peace in conflict areas in Ghana.

The programme under the theme: “Peace Building and Conflict Resolution: The Role of Women,” which was sponsored by the Canadian Fund for Local Initiative (CFLI) aimed at empowering stakeholders in conflict prevention, management and resolution.The Coordinator of the Programme, Mrs Bridget Adongo, stressed that when it comes to conflict, it was women and children who were the most vulnerable and impressed upon women to use their influence on their husbands and community not to engage in conflict.