Pervez Khattak is our elder, party respects him 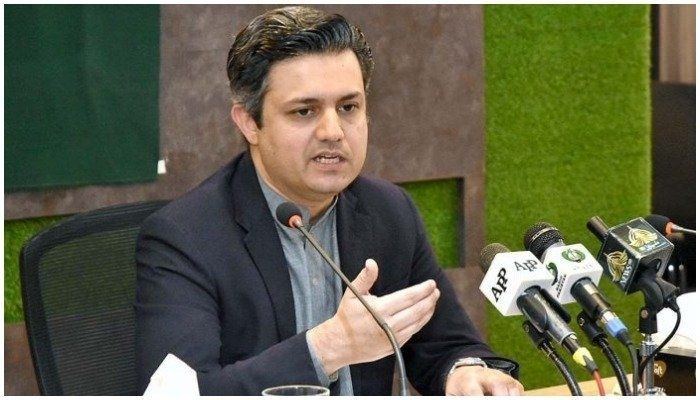 — APP ISLAMABAD: Minister for Energy Hammad Azhar, referring to Pervez Khattak's "heated argument" with Prime Minister Imran Khan, on Saturday said that "Pervez Khattak is our elder, the party respects him and he has every right to speak".Related items Khattak had raised the issue of gas in Khyber Pakhtunkhwa with Prime Minister Imran Khan, upon which the prime minister asked me to give a briefing, which I did, Azhar explained.He added that the prime minister told Khattak that using data provided by the energy minister, a decision would be made in the national interest.Reports are rife on media about Khattak exchanging heated words with PM Imran Khan, as well as expressing displeasure at Azhar, during the party’s parliamentary meeting on Thursday.

However, in a statement, Khattak clarified that Imran Khan is his "leader" and he has no disagreements with him.Saturday Jan 15, 2022 Federal Minister of Energy Hammad Azhar speaking during a press conference.

Pakistan to repay foreign loans worth Rs8.638b till June as vulnerabilities multiply

Which match holds the best memories for Shaheen Afridi?

The affects of over-centralisation on public expenditure

Security and policing in 2022

Throwback to Babar Azam’s stunning bowling in U19 world cup

Pakistan to repay foreign loans worth $8.638b till June as vulnerabilities multiply

Mohammad Rizwan reveals reason behind 'no photos with female fans'

No development in ‘informal’ Taliban talks

Ramiz Raja honours Men in Green for performing well in 2021

Queen Elizabeth is looking to hire chairman of royal palaces

Meghan Markle and Harry to react to Queen's decision to strip Andrew of royal titles?

WhatsApp to have new option while sharing videos, images

Kanye West details why he punched man in LA

Kanye West gets called out by animal rights organisation, Here’s why

Will schools be closed? NCOC to review COVID-19 situation on Jan 17

How mild is the Omicron?

Need of hour not just an IMF demand

Kate Middleton could save monarchy amid scandal and crisis

Govt raises price of petrol by Rs3 for rest of January

'Miracle' baby delivered by Canadian doctor on board flight to Uganda

Cricketers react to Kohli stepping down as India Test skipper

Full text of statement from his legal representative

Rupee expected to be stable amid export dollar inflows

Tips on how to protect your WhatsApp from unauthorised access

Prince Harry scared to return to UK with Meghan Markle, Archie and Lilibet

'How much more is the Queen supposed to endure?'

Shahbaz Sharif has 'asked for a deal for four people', Gill claims

Lili Reinhart weighs in on being 'vulnerable' against body image

Prince Harry criticised for 'moaning about something' days into new year

Julia Fox says Kanye West is her 'reward' after distress

Baby dies from COVID-19 in Qatar

Imran Khan's departure only solution to all problems

Who does Babar Azam turn to in difficult situations?

How cold will Karachi get this week?

Jeff Goldblum leads the Hollywood men on ramp in Milan

Political mafias to blame for encroachment on Gutter Baghicha

The challenge of establishing rule of law

'Texas hostage-taker had no connection to Pakistan, radicalised in England'

Rasheed Naz passes away at age of 73

Prince Harry is behaving like a shameless, entitled hypocrite

2 dead as fire breaks out in private hospital

Renowned educationist Dr Ismail Saad passes away at age of 90

Pakistan in close contact with UAE authorities about killing of national

Schools use trained dogs to rule out COVID-19 cases

Kate Middleton shot down rumours of her 'obsession' with Prince William

Pakistan's growing financing needs may lead to another IMF loan

How does Shaheen Afridi manage his anger on the pitch?

Cardi B to introduce her son's name with unique face tattoo

Money paid to hitman via hundi from Pakistan to kill blogger

Govt mulls over schools' closure for children under 12

Queen will not take 'threats' from 'spoiled children' Harry, Meghan

Modi trends on Twitter after tech glitch during WEF speech

Not against military, but militarisation of civilian institutions

How can Lahore Qalandars grab maiden PSL title? Mohammad Hafeez has some tips

Coalition strikes kill over a dozen in Yemen after UAE attack

At the end of the day, it is only the economy

What information does WhatsApp collect from its users?

Aiman Khan babygirl Amal owns the stage with her singing

Meghan Markle launches complaint to BBC against its journalist

Texas hostage-taker Malik Faisal had no criminal record in Pakistan

Authorities will euthanise 2,000 small animals due to COVID-19

Policemen assault women in Quetta in absence of female constable

Osman Bey sent to gallows in latest episode of 'Kurulus

Usman Buzdar leaves behind all chief ministers in performance survey

a bridge between US and China?

No more indoor dining, weddings for cities with over 10% infection rates

What are NCOC's new guidelines for schools in Karachi, other cities with high infection rates?

'No issues with Mohammad Hasnain's bowling'

Rupee depreciates slightly against US dollar

NCOC lowers crowd capacity to 25%, bans entry of kids under 12

Haris Rauf reveals how he got his hands on Dhoni's jersey

Who will triumph in PSL 7?

Prince Harry can't 'pick and choose' where he gets security, says ex-royal cop

Which cities are facing restrictions because of positivity above 10%?

Wife breaks husband's fingers after he reveals intentions to remarry

Prince Andrew High School to get a new name

Most Covid rules in England to be scrapped as infections fall

No Indian player spotted in ICC T20I Team of the Year

Zareen Khan not a 'monkey' on Salman Khan's back

Britney Spears' father spied on her? Court agrees for separate trial to find out

Can you guess which Pakistani cricketer's childhood photo this is?

A National Security Policy without taking people’s representatives on board?

What are health and safety protocols for PSL7?

NEPRA slashes power tariff by Re0.99 per unit on quarterly adjustment

Queen to mark her jubilee and father's death in private

Who will dominate PSL7?

Inflation drivers in euro zone will ease gradually in 2022

105 nations, including Pakistan, to get cheaper Merck COVID pill

Meghan and Harry's names used to generate buzz around a property

How high can rates go after imposition of 17% GST?

A history of high-octane clashes

Did Maryam Nawaz gift Junaid Safdar a Rs140m car on his wedding?

What does the Murree inquiry report say?

Schools with high COVID positivity to be closed for one week

International players ready to participate in PSL 7 despite Lahore blast

Nobody could be Imran Khan’s substitute in PTI

ECC approves export of commodities to Afghanistan in Pakistani currency

WhatsApp in works to allow iOS message transfer to Android

Man's dead body surrounded by 124 snakes found in US home

Prince Harry and William mourn the death of their polo tutor

Number of patients on critical care surges past 1,000

The success story of a polio victim in Pakistan

US studies highlight the need for COVID boosters to fight Omicron

Will Queen allow Prince Andrew to attend her big event?

No decision taken for lockdown in Sindh

'The Duke may keep royal title despite losing military rank'

Govt aware of inflation rate, taking steps to reduce it

One symptom that experts say can help predict COVID

No evacuation for now of US citizens in Ukraine

Prince Andrew may lose his bodyguards next month

Selcan Hatun will die in next episode?

COVID-19 situation continues to worsen in Pakistan amid fifth wave

Current account deficit climbs to $9.1b in first half of FY2022

The Weekend beats Justin Bieber with THIS number on Spotify

A glimpse into the PSL 7 anthem

Royal family 'distancing' itself from Prince Andrew for creating 'controversy'

In a first for Pakistan, Fatima Sana bags ICC Women's Emerging Cricketer of the Year 2021 award

Pakistani rupee expected to gain ground against US dollar next week

Who's behind Prince Harry's recent moves?

No Way Home' swings to sixth-highest grossing film in history

My 'Muslimness' was a problem, says sacked British minister

Erin Holland is back and 'excited' for tournament's seventh season