Union Budget 2023-24 LIVE Streaming Details: When and where to watch FM Nirmala Sitharaman's Speech online and on TV?

Rita Ora embraces the naked dress trend that is dominating 2023

Loss of the Ironworks will 'leave a gap', says director amid outpouring of memories of Highland venue

Mothers Against Drunk Driving (MADD) is pleased to announce that its National Board of Directors has named Stacey D. Stewart as the new CEO of the organization 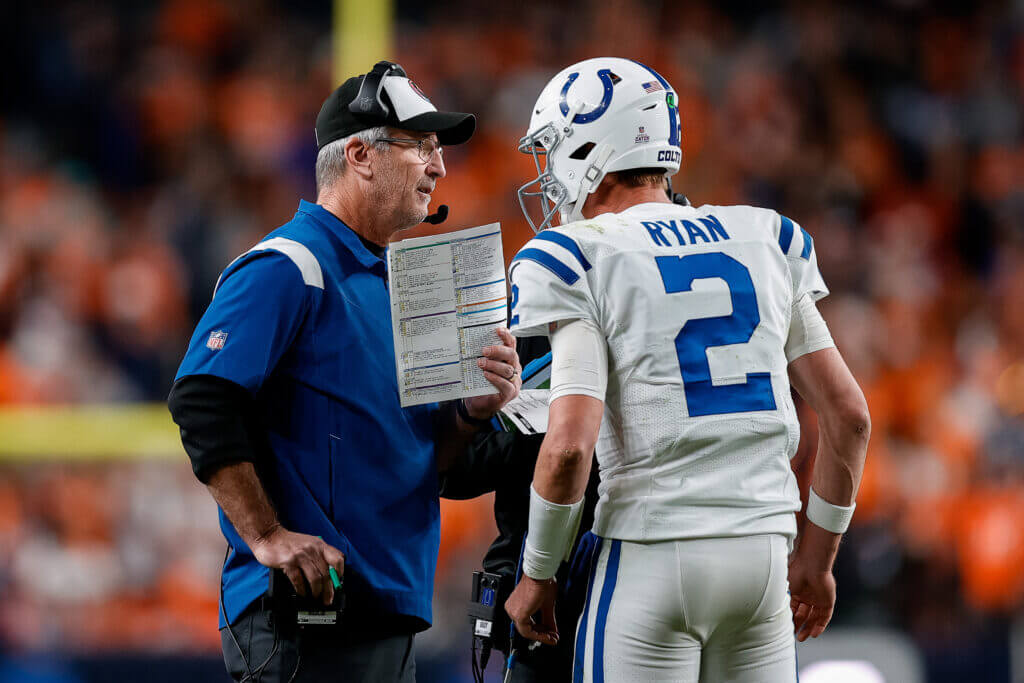 Is David Tepper close to hiring someone? How do Reich and Wilks stack up and is Kellen Moore a serious candidate?

Panthers defensive end Brian Burns was a vocal supporter of Wilks after he became the interim coach in October.But as soon as Irsay shocked the NFL world by bringing in Jeff Saturday as interim coach, the Colts went back to Ryan at quarterback.Steve Wilks was 6-6 as Carolina’s interim coach this season.Whether Wilks’ Panthers legacy will be as an interim coach or something more should be clear any day.

Wilks and Reich have been head coaches in the NFL and know how the league operates — good, bad or otherwise.Wilks lasted one season as Arizona’s head coach in 2018 — with a rookie quarterback he didn’t choose — before the Cardinals fired him and replaced him with Kliff Kingsbury as part of the Sean McVay-inspired wave of young, offensive gurus who became head coaches.

Previewing the 2024 MLB Hall of Fame ballot: It’s Adrián Beltré’s year, but who might join him?

Buckley: With Bill O’Brien on board, it’s time for QB Mac Jones to show what he can do

Can the Browns fix their D-line in a single offseason? Askin’ Jackson mailbag

3 NBA players stepping up for injured stars, plus a look at Rivals Week

Life lessons with Stanley Cup winner Barry Trotz, who will be back soon enough

Tennessee extends Josh Heupel through 2029, raises salary to $9 million: How does that stack up in SEC?

Scott Rolen reflects on a Hall of Fame career: ‘Wow, this is real’

If Manchester United miss out on Europe, they will struggle to keep Russo, Earps and Batlle

Brentford’s 25 B team players: Where are they now?

How the Bengals schemed Ja’Marr Chase to fluster the Bills

Ryan Hartman owns penalties as Wild slip from playoff spot: ‘I let my team down’

Blues’ Colton Parayko demoted to third pair: ‘He’s definitely not had the year that we expect’

How does Michigan’s drama compare? All programs aren’t like Jim Harbaugh’s Wolverines

Francisco Álvarez, Brett Baty and a detailed overview of the Mets’ farm system

Vikings’ salary-cap situation: How Minnesota can maneuver around its cap constraints

Should Eagles’ Haason Reddick have been a Defensive Player of the Year candidate?

What Anthony Gordon could add to Newcastle – pugnacity, pace and pressing

What next for Zinedine Zidane now the France job isn’t available?

Real Madrid and Atletico Madrid: Bad blood, broken promises and a city rivalry as fiery as ever

Stars’ failure to earn overtime payoff is getting frustrating

Colts’ Stephon Gilmore has one big NFL goal left: ‘I gotta play with my brother’

Best recruiters at Miami, Florida, FSU? Has USF given up on Tampa? Sunshine State mailbag

Seattle Kraken are No. 15 in 2023 NHL prospect pool rankings

Jakob Chychrun’s trade destinations: 7 teams that could (and should) be interested

At Rögle, Red Wings prospect William Wallinder is delivering on his tantalizing toolkit

How Damian Lillard scored a ‘simple’ 60 in Blazers win: ‘Something you don’t get to see very often’

What Arnaut Danjuma can bring to Tottenham: Swagger, skill and shooting prowess

Gammons, Stark and Rosenthal on the Hall of Fame results, and why Scott Rolen’s election mattered

Commanders at Senior Bowl: The key positions and players they’ll be watching

NBA All-Star Game 2023: Who our voters picked for East and West starters and why

Five NASCAR drivers facing the most pressure in 2023, from Busch to Bubba

Gareth Southgate questioned himself over whether to continue as England manager

Wild trade board: Who stays, who goes and what’s Bill Guerin thinking?

What broadcaster Jack Edwards said in his apology to Lightning’s Pat Maroon: ‘We got it out’

Georgia football mailbag: What to make of Bulldogs losing another WR to transfer portal?

As sports betting ads surge in Canada, the quest for order nears Parliament

Phil Parkinson on the Welcome to Wrexham cameras and beating Mourinho

Beckham, Neymar, Drogba and Alvarez — West Ham’s ones that got away

Maple Leafs’ John Tavares is not a hockey robot: ‘He has Kombucha in a keg’

Walsall’s metamorphosis under US owners: ‘They were used to losing, used to moaning’

Eddie Nketiah: Why Arteta’s Arsenal have shown faith – and how they’ve helped him hit form

‘I’d rather shoot you than sell you’: How to get unhappy players to stay in a transfer window

Sabres get Eric Comrie back on track, push closer to playoffs with fifth straight win

NHL99: Phil Esposito’s boldness followed him from the ice to NHL front offices

NCAA Tournament Bracket Watch: Who joins Purdue and Alabama as No. 1 seeds?

AFC Championship roundtable: How the Chiefs or Bengals can reach Super Bowl LVII

Giants 2022 rookie recap: Are there building blocks beyond Kayvon Thibodeaux?

Could the Avalanche and Bo Horvat be a trade fit? Breaking down pros and cons

A.J. Brown can laugh at himself, but the Eagles WR is not joking about being open

State of the Nets before the trade deadline: Kyrie, KD, Ben Simmons and more

Are Jarrett Allen’s lower numbers a concern? Will the Cavs make a trade at the deadline?: Cavs mailbag, part 1

Milwaukee Bucks and the readers’ trade proposals: Who says no?

NHL Power Rankings: As the tank race gets sloppy, the Avalanche push upward

State of the Steelers: What we heard from Art Rooney II and what it means

Without Auston Matthews, the Maple Leafs are going to test rookie Pontus Holmberg

Dehner Jr.: Why this Bengals team is even more ready for the moment

Billy Packer’s life, legacy as one of college basketball’s most influential announcers

Jurgen Klopp: Mohamed Salah’s form has suffered due to changes in Liverpool’s attack

The CONCACAF/CONMEBOL partnership: Everything we know so far — Copa America, W Gold Cup and beyond

Grizzlies coach Taylor Jenkins on Tyre Nichols: ‘It’s hard to grasp what our city is going through right now’

FM23: Manchester United signed Weghorst, but should they have signed someone else?

Newcastle United and the mystery of the missing first-half goals: 16 games and counting without conceding

Meek: With Michigan’s close loss to No. 1 Purdue, season continues slipping away

James Laurinaitis returns to Ohio State as graduate assistant: How the legend will assist recruiting

Falcons hire Ryan Nielsen: Who is the new defensive coordinator and what’s next?

Winnipeg Jets are No. 13 in 2023 NHL prospect pool rankings

Remembering Billy Packer: Jim Nantz and more on working with the longtime voice of the Final Four

As the Avalanche-Jordan Binnington feud continues, Colorado comes out on top

Marcus Rashford and the goal celebration that is transcending football

Leicester City to end transfer window with a flurry: Tete, Harrison and Souttar

Who is Chad Henne? Everything you need to know about Chiefs’ backup QB

Kyle McCord well prepared for Ohio State QB battle: ‘He has that swagger’

L.A. Kings and the trade deadline: Should they find a new No. 1 goalie?

Pacers, Myles Turner agree to 2-year extension, per sources: How it impacts his trade eligibility

The Pulse: Does Patrick Mahomes being hurt matter? Plus, Djokovic title No. 22 and NWSL expansion

Anthony Gordon joins Newcastle – but how he will be remembered at Everton?

Lakers issues with officiating come to a head after crucial no-call in Boston: ‘We got cheated’

Kentucky basketball falls short against Kansas, but ‘it’s not the end of the world’

Ryan Reynolds and Rob McElhenney’s effect on Wrexham: ‘They’ve given us everything we lacked’

Bruins lose 3 straight for the first time this season: ‘We need a little bit of a rest’

Eagles meet their own expectations by clinching Super Bowl berth as No. 1 seed

Chris Jones predicted a dynasty. On Sunday, he led the Chiefs back to the Super Bowl

Jones: Patrick Mahomes’ legacy grows as he wills Chiefs to another Super Bowl

Kravitz: Though I was wrong, Myles Turner’s new deal is looking right for Pacers

Want Super Bowl tickets? Why $5,000 is likely the new floor to get them

NFL Draft 2023: 10 players who could make sense for the Patriots

What if the Canadiens had drafted Brady Tkachuk instead of the Senators?

Montreal Canadiens are No. 11 in 2023 NHL prospect pool rankings

NBA style power rankings: A variety, from trenchcoats to a Kobe Bryant tribute

Iowa mailbag: Is a leadership change needed? What is Spencer Lee’s legacy?

Raiders at the Senior Bowl: 20 intriguing prospects to watch

NBA trade deadline: What Shams is hearing about the Raptors and trade talks around the league

Basu and Godin: Why the Canadiens recalled Owen Beck and why we may see it again

Can 49ers afford to bet it all on eight games of Brock Purdy? Sando’s Pick Six

Storybook ending awaits Super Bowl-bound Eagles: ‘Could you write it better than that?’

Hertha and Union: A tale of two Berlin clubs heading in different directions, as Bobic pays the price

PSG in talks to sign Hakim Ziyech on loan

NHL trade board 2022-23: Bo Horvat is off the market, injuries pile up and more updates on top deadline targets

Is your transfer target wavering over a move? Deploy Agent Player

Are the Warriors — 5-2 in their last 7 games — gaining minor momentum?

Doug Williams Q&A: Why a Super Bowl with Patrick Mahomes, Jalen Hurts is so meaningful

Where does Michigan stand with 5-star prospects Nyckoles Harbor and Jadyn Davis?

How Weston McKennie will fit in at Leeds