‘We Have to Get It Right’ – NBC Connecticut

Where have all the progressives gone, long time passing? 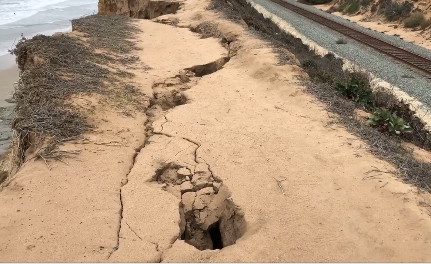 OCEANSIDE (KUSI) – North County Transit District officials Wednesday issued a public update regarding plans to enhance safety and rail service reliability along the oceanfront bluffs in Del Mar.“NCTD is committed to developing a solution for the railway along the Del Mar bluffs that promotes rail safety and ensures reliability,” said Matthew Tucker, the transit agency’s executive director.“Our collaboration with the Coastal Commission and the city of Del Mar seeks to develop a community-sensitive approach that furthers these goals until permanent, safe and legal crossings can be constructed.” Highlights of the update include: — NCTD, the Coastal Commission and Del Mar have agreed to postpone the Surface Transportation Board’s regulatory review of NCTD’s rail rights along the bluffs, and a working group has been formed to review project alternatives and select a preferred approach by Dec.

31; — NCTD has completed a geotechnical review confirming that proposed fencing would not affect bluff stability; — NCTD has retained the Civilpros engineering firm to conduct right- of-way mapping, surveying, design and other services to foster a complete understanding of the refined fencing proposal, including a visual-impact analysis that will address potential impacts of the fencing on public views; — NCTD is participating in the San Diego Association of Governments’ Coastal Connection Study, which will analyze potential locations for public- access improvements along the Del Mar bluffs; and — An initial fencing plan proposed by NCTD has been refined to be more community sensitive while fostering increased safety and continued access to the trails on the upper bluffs, according to the transit agency.The refined fencing proposal, which is subject to review by Civilpros, reduces the proposed overall length of the fencing by 7,262 linear feet and lowers the planned height of more than half it from six to four feet, according to NCTD officials.

Man charged, arrested on suspicion of 1999, kidnap, rape in Escondido -

68th Annual OMBAC Over the Line -

San Diego mother calls out Board of Supervisors for pandemic restrictions -

Five hospitalized in two-vehicle collision on I-15 in Fallbrook -

The latest on the Gov. Newsom recall with Ellie Hockenbury -

Coco Gauff to miss Olympics after testing positive for coronavirus -

1 person killed, 2 in custody after 2 separate shootings in Gaslamp Quarter -

'Let Them Breathe' rally out in Carlsbad all for mask-choice -

When will COVID-19 vaccines be fully approved by FDA, what happens when they are? -

Matlock family goes to Ensenada to give rides at orphanage -

Cleveland Indians officially change their name to the Guardians -

Fast Camp athletes headed to the Junior Olympics in Houston -

Former Secretary of State, Mike Pompeo to attend We Are Israel rally in El Cajon on Sunday -

Mike Slater warns against TikTok; invites community to 'We Are Israel' rally -

Forecast your fitness and avoid the Delta dozen with Clark Bartram -

The latest on the recall election with Tom Del Beccaro -

Flash is ready to zip his way to his new owners -

Celebrating the 50th anniversary of the Apollo 15 launch -