A tale of two Afghanistan withdrawals

Oral Thrush Market Outlook: Competitive Intensity is Higher than Ever

Supercut of media trumpeting BOGUS ‘Russian Bounties’ story. (P.S. some of them STILL are.) – The Right Scoop

5 Bolton homes that have reduced their asking prices 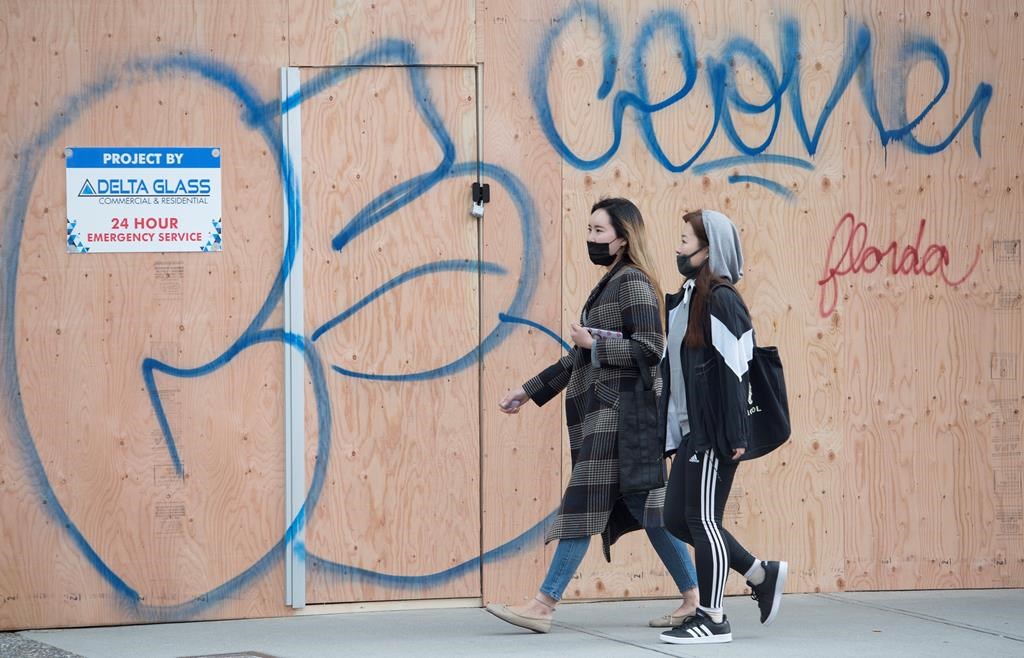 Counsellors in B.C. are seeing a spike in people of Asian descent setting up appointments following anti-Asian hate incidents over the past year.

are seeing a spike in people of Asian descent setting up appointments The spike follows anti-Asian hate incidents over the past year A Chinese-Canadian woman is urging others to share their stories if they are struggling with their mental health BURNABY (NEWS 1130) — It was three months ago when Rhiannon Yee realized she needed help.“That was really hard because there’s such a … stigma toward mental health in the Asian community — where we just don’t talk about it at all.She thought that I was – well, this sounds bad, but, just like Asian culture is like, ‘you must … have something wrong with you,’ when it’s actually completely normal to have a mental health crisis, especially with everything that’s happening in the world right now,” she notes.Today on @NEWS1130 @CityNewsVAN a young woman of Chinese descent – Rhiannon Yee from #BurnabyBC is speaking out about the importance of getting help for mental health.

N Carolina motorist sues police after being thrown on glass

Russia and West spar over vote to punish Syria over weapons

Ahead of budget, agency funds skills-training program to buffer against future shocks

The Line 5 pipeline: A disaster waiting to happen, or necessary to avoid an energy crisis?

Cause of gas leak from Hilcorp fuel line being investigated

The latest news on COVID 19 developments in Canada for Wednesday, April 7, 2021

CME calls for vaccines for essential workers in the manufacturing sector

No charges for Georgia lawmaker arrested during bill signing

Belgium imposes ban on AZ jabs for people under 56

Guide to booking a COVID-19 vaccine in the GTA and Toronto: Who, where and how

Pandemic shifted how donors gave, but will it continue?

Mexico president justifies release of kingpin targeted by US

Education workers in Toronto and Peel, those 18+ eligible for vaccine in hotspot regions

Property owners happy, digital users not so much as Manitoba tables budget

Even as the third wave rises, new businesses offer a glimpse at pandemic’s end

Gardiner on-ramp from Jarvis reopens; westbound stretch will close for the weekend

The latest news on COVID-19 developments in Canada for Thursday, April 8, 2021

Keri Hilson is basking in her 'manifestation season'

Amtrak passenger rail service to return to Vermont in July

Corrective to April 6 story about electric vehicle sales in B.C.

'It was very scary': Family of teachers with 7 children contends with COVID-19

Americans use stimulus to save, pay off debt more than spend

EXPLAINER: Why would an expert witness go without pay?

Man who killed girlfriend, mother, stepfather not eligible for parole for 35 years

Rioters ignore pleas for calm as violence flares in Belfast

They were switched as babies, and found out decades later. And they aren’t alone.

CP NewsAlert: Prince Philip, Duke of Edinburgh, dead at the age of 99

Not your average royal consort

Review: 'In Another World,' Cheap Trick still on top of it

France advises vaccine mixing for some, amid clotting fears

Here's a quick glance at unemployment rates for March, by province

Woman who coughed on cancer patient gets 30 days in jail

No region in the world spared as virus cases, deaths surge

Judge orders one accuser of Texans QB Watson to be ID'd

AP Interview: Stacey Abrams on voting rights, her next move

Summit and trail are renamed after Native American outcry

Boeing sues subcontractor over work on Air Force One planes

Rapper DMX has died at 50

Number of COVID-19 patients being treated in ICUs up 23 per cent over last week: Tam

Hackers try to extort University of Colorado in cyberattack

NOT REAL NEWS: A look at what didn't happen this week

Cameco to restart Cigar Lake uranium mine in northern Saskatchewan

Motorcyclist injured in crash on Hwy. 427 near Eglinton

World men's curling championship playoffs on hold due to COVID-19

Gun salutes mark death of Prince Philip across the UK

'Road to Freedom' highlights history that needs to be known

Man charged in spate of explosions outside frenemy's home

Arrests made during Mississauga protest

Searching for clues to the COVID-19 pandemic in the sewers

CEOs gather to speak out against voting law changes

Holocaust survivors use social media to fight anti-Semitism during pandemic

Slowing vaccine deliveries and pandemic-era Ramadan: In The News for April 12, 2021.

MTY chairman Stanley Ma selling up to 880,000 shares in company

More than half of Canadians uncomfortable with AstraZeneca shot, poll suggests

Brothers Ron and Clint Howard have memoir coming in October

Microsoft buying Nuance in deal worth $19.7B

The latest news on COVID-19 developments in Canada for Monday, April 12, 2021

Completion of Gardiner rehabilitation project to be delayed 3 years

Firefighter killed in blaze in Russian city of St Petersburg

Postcard from Titanic's radio operator being sold at auction

Man who pushed stranger in front of subway sentenced to life, no parole for 14 years

The Latest: Britain meets target on jabs for over-50s

US Bishop Hoeppner resigns after Vatican probe into coverup

5 miners die, 4 missing in coal mine collapse in Afghanistan

Business support for COVID restrictions down from last fall: survey

EXPLAINER: The law and science behind the CDC’s eviction ban

Survey: Nearly 1 in 3 contribute to a crowdfunding drive

A right to healthy environment included in proposed changes to CEPA: Wilkinson

Russia says troop buildup near Ukraine is a response to NATO

US to miss Afghanistan May withdrawal date, sets 9-11 target

US intel report: Virus impact to cause global 'aftershocks'

To retain workers, Walmart moves more of them full time

Prosecutors: No charges for officer in Capitol riot shooting

New pathway to residency for 90,000 essential workers and graduates: Mendicino

Canadian greenhouse emissions to use outsized portion of what climate can bear: study

EXPLAINER: Why outside prosecutors review killings by police

Kansas fight shows how election 'reforms' may favour one side

High Park to stay open, virtual event in the works ahead of cherry blossom bloom

Hotspot residents 18+ will be contacted directly for COVID-19 vaccine at mobile clinics: Pegg

'I want to reassure you': De Villa weighs in on Johnson & Johnson blood clot risk

New US Senate panel to tackle Nevada tourism amid pandemic

Male shot near Jane and Sheppard

Some travellers to Canada opting for fines over hotel quarantine, feds say most following rules

EXPLAINER: What are the Iran nuclear talks all about?

Is in-person worship an essential service?

Body of US Capitol Officer William Evans returns to hometown

Japan's Suga heads to US for China-focused talks with Biden

Facing the music: Summer concert festival organizers see no path ahead in pandemic

A look at new Biden administration sanctions against Russia

AstraZeneca doses 'not exactly flying off the shelves' for Ontarians 55-plus, infectious diseases expert says

Mercedes rolls out luxury electric car in duel with Tesla

Dulux apologizes for painting Tottenham in a bad light

'Sicker and younger': Toronto ICU copes with pressure during third wave of pandemic

Quebec crooner Michel Louvain, who enthralled a generation of fans, dies at 83

Judge: R. Kelly to be moved to NYC for sex-trafficking trial

US opens more distance in worldwide race against coronavirus

Pedestrian dies after being struck by dump truck in North York

White House: Intel on Russian 'bounties' on US troops shaky

Bill would give US vets of 1966 Spain bomb accident benefits

Colorado man to remain jailed after attack on US Capitol

'They know the rules': Crombie says Mississauga gym will be given maximum fine for staying open

Head of Tokyo Olympics again says games will not be cancelled

How the Kremlin provides a safe harbour for ransomware

Iran starts enriching uranium at 60%, its highest level ever

Why does nobody talk about the dangers of meditation?

Gunman kills 8 in shooting at FedEx facility in Indianapolis

GTA hospitals brace for the worst, add tents to accommodate surge in patients

Unity Health pausing vaccinations at 2 Toronto hospitals due to shortage

US home construction rebounds in March after frigid February

US puts visa restrictions on Uganda, saying vote was flawed

Kremlin ponders next moves after being hit by US sanctions

Prince Philip designed his own hearse, a modified Land Rover

Moderna cutting next week's delivery of vaccines nearly in half, Pfizer shipments to increase

Ford declines help from Trudeau, Red Cross: 'We have a supply issue'

Committee reverses itself on wrapping up investigation into military misconduct

Israel: Rocket from Gaza is 2nd in 24 hours; no injuries

Autopsy: Man killed self during airport shootout with police

680 NEWSAstraZeneca doses 'not exactly flying off the shelves' for Ontarians 55-plus, infectious diseases expert says