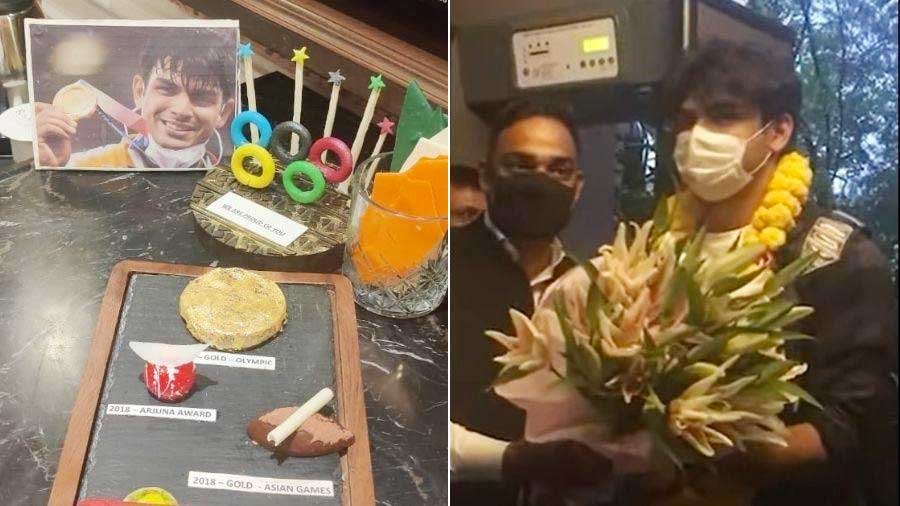 Neeraj Chopra, who won India’s first and only athletics gold in the Olympics in Tokyo last month, requested for Rosogolla after a traditional Bengali meal at the East India Room in Raajkutir on Tuesday.The desserts inspired by the Indian flag and Neeraj Chopra's medals that were served in the champion's suite Neeraj in the 'Rajababu’s Suite’ at Raajkutir Rakesh Ranjan/ Facebook On Wednesday, Chopra was felicitated at a programme in the city, which was attended, among others, by Manoj Tiwari, cricketer and Bengal minister of state for sports and youth affairs.Neeraj Chopra at a felicitation programme in the city on Wednesday Image courtesy: Raajkutir Back at Raajkutir, he had three more meals at the heritage look-and-feel restaurant inspired by the zamindari era.Watch: Neeraj Chopra being welcomed at Raajkutir  Courtesy: Raajkutir management

ADVERTISEMENT The javelin champion, who was on a short tour of the city, also had two servings of Mishti Doi.“Neeraj told us, ‘I want to have Rosogolla and Mishti Doi.