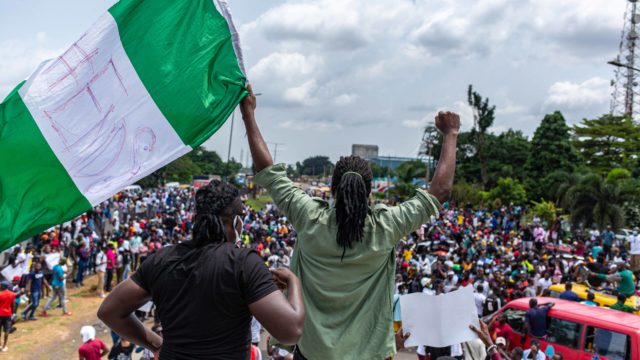 The family of Ikechukwu Iloamauzor from Amofiabuzor Amokwe in Udi Council of Enugu State, who was killed by a stray bullet

Speaking to newsmen in Enugu, the monarch called on the Federal Government and the Inspector General of Police (IGP) to ensure that justice was done on the matter by bringing the killers to book and paying compensation to the bereaved family.“The new surge in these ugly incidents calls for the immediate and unrelenting attention of the government at the federal and state levels.“Over the past five years, SARS, which was founded to confront the grave challenges of increased cases of armed robbery and related crimes, has been accused of wilful abuse of power, defining itself by its ability to wound and torment the underdog, targeting and profiling the youth (most of whom are released without charges after going through hell in the hands of SARS operatives and their colleagues), harassment, extortion, torture, and extra-judicial killing,” he said.Muslim centre tasks govt on impartiality The family of Ikechukwu Iloamauzor from Amofiabuzor Amokwe in Udi Council of Enugu State, who was killed by a stray bullet during the #EndSARS protest in Lagos on Monday, is demanding justice.

The traditional ruler of Ibagwa Nike community in Enugu East Council, Igwe Emmanuel Ugwu, an in-law to the Iloamauzor family, has called for an investigation into the circumstances surrounding the death.ALSO, the Muslim Public Affairs Centre (MPAC) has called for honest, broad, and serious actions from the government to turn the Nigerian Police Force (NPF) into a professional, well-motivated and modern security outfit.