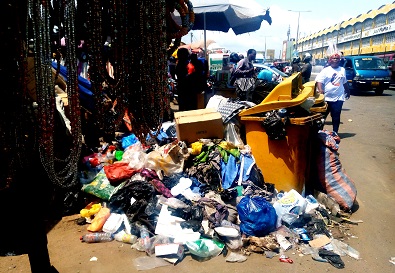 • Refuse pile on the streets of Kaneshie Persistent delay in collection and disposal of rubbish generated at the Kaneshie market and its environs has become a source of worry to traders, shoppers, pedestrians, travelers and residents.” Madam Boateng also said some residents had to resort to using the Kaneshie market and the footbridges as refuse dump due to insufficient dustbins in their community.She added that the assembly would conduct investigations into the case of sanitation workers allegedly taking money to allow certain people to dump refuse at the Kaneshie Market.Madam Haruna, who sells around one of the two footbridges at the market, accused two sanitation workers from the Ablekuma Central Municipality Assembly of dumping rubbish around the footbridge near the Metro Mass Transit bus station.

According to her, the assembly’s sanitation workers collect refuse from the points of generation and dumped it beside the traffic lights, the footbridge and by the roadside “because the Municipal Assembly does not have enough land to dump the refuse”.They complained that it was an eyesore and nuisance considering the stench and flies from the different heaps of refuse around the market, hence their call on the Ablekuma Central Municipal Assembly to evacuate the rubbish to prevent outbreak of diseases, such as cholera in the area.