Gov. Cuomo: 'The issue is supply'; the latest on NYS vaccine rollout

UNIBEN ask students to stay at home till further notice

On his way out, Trump emits exec order suggesting US cloud giants must verify ID of all foreign customers • The Register

The next-generation data center is here today • The Register

Apple TV+ has only reached a 3% share in the U.S. streaming market 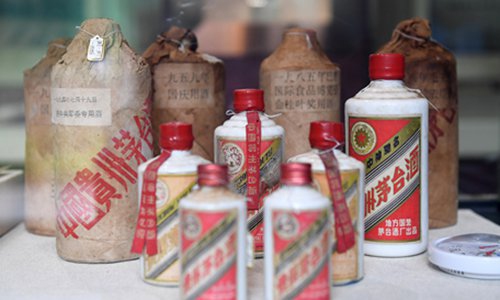 Chinese Baijiu, together with Brandy, Whisky, Vodka, Rum and Gin, ranks among the top six distilled spirits in the world, according to the CADA.The spirit, adopts natural multi-strain solid-state fermentation and distillation, is completely different from the traditional concept of distilled spirits in the West.Although accounting for one third of the world's total distilled spirits consumed due to China's huge consumer base, Chinese Baijiu lacked a formal English name and was often referred to Chinese spirits, Chinese distilled spirits and Chinese liquor.Photo: VCG Chinese customs have officially adopted "Chinese Baijiu," as the new terminology for the Chinese distilled spirit, for product labeling for exports, after repeated communication with the tax collection bureau of the Chinese customs authorities since China Alcoholic Drinks Association (CADA) formally submitted an application to the customs authorities on April 25, 2020, according to the association.

But for years, Chinese Baijiu lacked an official, accurate English name, causing confusion among overseas consumers when referring to this type of spirit.The news went viral online after its release and became one of the the top 10 topics at China's twitter-like social media platform Sina Weibo on Thursday, with many netizens applauding the change, saying the new name that attaches with the Chinese term, would be like Toufu and Jiaozi that reflects its own name in English language.

A total of 24,112 organs have been donated in China over the past 4 years

Sweden govt should ponder what led country to nightmare

Return of Boeing 737 Max to China dependent on safety, not political considerations

Can UK draw in India to boost its Asia-Pacific strategy?

China has no judgment on Sweden’s coronavirus policy: ambassador

A window of opportunity is open for resetting China-US relations: Kuhn

EU, China nearing a BIT pact, driving US to reflect on unilateralism

‘World’s factory of violin’ trains farmers into craftsmen, lifts region out of poverty

In Lebanon, people turn to laughter to combat trauma

China-Russia strategic ties to be strengthened, sending strong signal to new US govt

Sinovac may further optimize its vaccines before releasing efficacy data

US prefers SCS instability so it can thrive

China willing to assist with ill Australian expeditioner at Antarctic base: FM

1m vaccinated but US admits rollout lagging behind

Lessons for China from US COVID-19 crisis

IS built up arsenal after ‘red flags’ ignored: CAR’s study

Is China-US constructive engagement and interaction possible under Biden?

After 10 months of confusion, chaos and deaths, can West have a clear virus-fight strategy?

Restrictive measures may be taken for flights from S.Africa amid fears of new strain

With mature anti-epidemic system, nightmare of 2020 Spring Festival 'will not return'

China's 'ghost towns' come to life thanks to urbanization and policies

Lives, spirits of drifters in Beijing mirrored in epidemiological survey

Epidemic control tightens amid sporadic cases as holidays near

Digital yuan is being trialed out in more Chinese cities, including Beijing

More foreign capital to be drawn to China market in 2021: investment banks

WHO warns of worse pandemics

China, Russia expect a boost in bilateral trade volume in 2021

How to increase quality of military exercises at a high-attitude, cold and anoxic environment?

Wuhan to release information on emergencies within 5 hrs, reserve 20,000 beds for infectious diseases in post-epidemic era

Variant strain detected in US

From aircraft carrier to fighter jets: what new weapons will join PLA's 2021 arsenal?

Coronavirus variant does not cause illness more severe than others: Public Health England study

Looking back at a difficult year

China moves on to tackle the 'chips' for agriculture

Herd immunity in China could be realized at end of 2021: expert

For Chinese people and the world, 2021 may bring a few pleasant surprises

US states shutting down prisons as COVID-19 sickens guards

New round of Afghan peace talks to begin

‘Up to 50 people’ killed in horrific Niger gun attack

‘Worst yet to come’ in COVID-19 pandemic

With first FTA, diplomatic trip, China to boost cooperation with Africa in 2021

2021 sees possibilities, but the road ahead will be hard: Global Times editorial

Two Chinese films accused of plagiarism to be removed on Monday: report

Hong Kong expects its GDP to gain for full year of 2021: financial secretary

Wuhan calls on public to stockpile emergency materials, drawing on lessons from early stages of epidemic

More gatherings, celebrations will be held in Wuhan; West should get used to it

Virus detected on environmental samples from a Daimler unit in Beijing: authority

Chinese envoy calls for consolidation of peace in Sudan

UK’s Brexit plans to be tested

New Dalian COVID-19 cases have longer incubation period, with some found to be positive after 11 tests

China may ask US companies to reveal their military links after NYSE’s delisting of telco firms: expert

A shares surging in first two sessions of 2021, buoyed by opening-up, strong economy

Love, tech and online harassment of women in the time of coronavirus

Through earthquakes and coronavirus, China-Congo relations tell a story of solidarity

Britain locks down over virus surge

Instead of a beacon, US-styled election shows world chaos, rifts

Can Biden administration rope in Vietnam to counter China?

Impact of ‘Trumpism’ on US constitutionalism, democracy dies hard

Africa is a stage for international cooperation, not for great power games: Chinese FM Wang Yi

‘Political-military dialogue’ between US, Taiwan a symbolic show, drops a ‘land mine’ for Biden to clear: analysts

China’s internet workers willing to devote themselves to the booming industry, while expecting regulated working hours

Biden condemns "insurrection" at US Capitol, as Trump urges supporters to "go home"

Chinese netizens jeer riot in US Capitol as 'Karma,' say bubbles of 'democracy and freedom' have burst

Tokyo prepares for state of emergency

US should be careful of an ‘American Spring’

Egypt eyes slow return of visitors after revenues dive in 2020

Elon Musk's praise of China's government for being 'very responsible' to its people's needs and happiness is objective: Chinese FM

The US is its own enemy on democracy: Global Times editorial

Chinese vaccines slower than Pfizer in WHO validation, but ‘intl orders unaffected’

Twitter’s ban on Trump strips US of ‘moral high ground’ in criticizing others on freedom of speech: observers

Is US entering an ideological ‘Civil War’?

Upholding that all countries, big or small, are equal is China’s foreign affairs principle: Wang Yi

China's CPI to grow by about 0.2% in December, while PPI to narrow contraction at -0.4%, economists say

Latest Boeing jet crash 'has no impact' on prospects in China: aviation analysts

More violence to emerge in US as ‘divergences remain unsolved’

With the silencing of Trump, how does freedom of speech feel?: Global Times editorial

Spring Festival travel rush to scale down amid virus resurgence

Capitol Hill debacle, the beginning or the end?

Some people from Xinjiang living overseas being coaxed to lie about 'missing' relatives: spokesperson

Virus causing Hebei’s latest outbreak may be imported from overseas via airports: experts

Mandalay-Kyaukphyu railway to create economic benefits for China and Myanmar

GT Voice: Bitcoin, on a roller coaster ride, may lead to rising risks

Baidu to produce intelligent cars in partnership with Geely

Guterres to run for second term as UN Secretary General

‘US digital hegemony’ behind Trump’s ban

With lowered flag for police, US double standards on democracy backfire

Hidden peril for social unrest in the US has been sown

Conspiracy theories, smears rise ahead of WHO experts’ China visit

Three N.China cities of over 22 million people under lockdown amid fresh Hebei outbreak

China will not pressure Swaziland, diplomatic ties ‘a matter of time’

220 million Chinese workers may need to transition between occupations: report

China's 5G technology is for common good of the mankind: FM

Internal crises, not external threats, can cripple the US

China-US trade back to growth in 2020 despite sanctions, export controls

One year since trade agreement, positive signs emerge for China-US ties ahead of US power transfer

Goods trade growing in China only

GT Voice: India, others can learn from Vietnam 2020 trade boom

China will take necessary measures to safeguard interests of Chinese firms after US invokes another round of crackdowns: FM

Why were US media silent on Pfizer vaccine deaths?: Global Times editorial

Mink may be host of coronavirus’ origin: China’s ‘Bat Woman’

Trumpism not likely to spill over into Western democracy

UPDATE: Rescuers hear ‘signs of life’ in E.China goldmine where 22 miners are trapped

Has latest round of COVID-19 infections in Hebei reached turning point?

Is the US falling apart? Many Americans think so

New US administration should view Pompeo as a ‘lunatic’: Global Times editorial

Discarding illusion, Chinese view US as it is

French Muslim council approves accord on ‘principles’ sought by Macron

Will Latin America lose the next decade due to the pandemic?

Couriers prepare for rise in parcels ahead of Spring Festival

AIIB grows and thrives out of doubts

One death, 447 with side effects spark concerns over safety of Indian vaccines

How can Australia avoid ‘uncharted territory’ with China ties

No country could perform perfectly facing a novel virus: experts

Xi to address Davos forum as world seeks to recover from COVID-19, US unilateralism

American democracy in desperate need of reinforcement at home

What made West lose the race of systems during epidemic fight?

No key project involved in BRI suspended for COVID-19: SASAC

'No best, but better' on public health crisis response: Chinese FM on interim report on WHO COVID-19 response

Paocai or kimchi? They share similarities but differ in ingredients, flavors and methods: Chinese FM