Saskatoon West too close to call as NDP, CPC jockey for win

1 in 5 people in Orange County are Asian. Why they’re still being targeted in hate incidents

Kena: Bridge of Spirits Review – A Breathtaking and Captivating Wonderland

Beto O’Rourke Expected to Run Against Greg Abbott for Governor 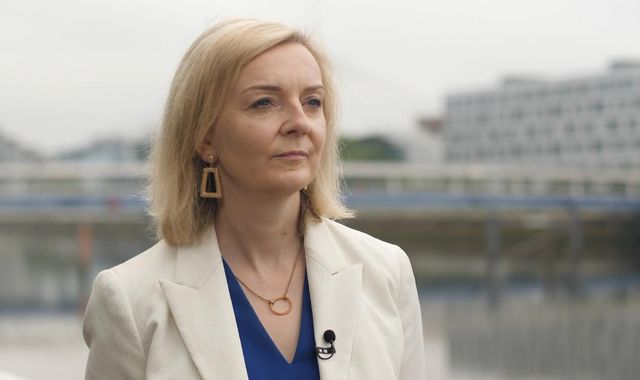 Moments before she arrived at Downing Street, Mr Raab left and it was announced he has been appointed as deputy prime minister, lord chancellor and justice secretary.Joining Mr Jenrick on the backbenches is Gavin Williamson who was sacked as education secretary, and Robert Buckland who has lost his job as justice secretary.She was quickly appointed as a junior minister in the Department for Education, then became environment secretary then justice secretary under Theresa May, the first woman to hold the position.Ms Truss, who grew up in Scotland and Leeds, read philosophy, politics and economics at Oxford University, where she was president of the university's Liberal Democrats before joining the Conservative Party in 1996.

Subscribe to the Daily podcast on Apple Podcasts , Google Podcasts , Spotify , Spreaker The other two top jobs are chancellor, kept by Rishi Sunak, and the prime minister himself.A former justice and environment secretary under Theresa May, Ms Truss' appointment means she is the second-ever female foreign secretary, after Labour's Margaret Beckett under Tony Blair.

Noura, seven, reunited with officers who saved her life after being stabbed by father

Crash On Main Road Between Newport And Cowes

Migrant pushbacks: How will controversial tactics to deter boats from reaching UK be used in the Channel?

COVID-19: Nurse says he might quit NHS if vaccines are made compulsory for health workers

COVID-19: Airlines accused of giving inaccurate advice that could cause passengers to be barred from flights

Emma Raducanu through to the US Open final in straight sets

Dame Cressida Dick to stay as head of Metropolitan Police until at least 2024, Priti Patel confirms

Win A Luxury Holiday To Barbados

Bernadette Walker: Man jailed for life with 32-year minimum sentence for murdering step-daughter after she accused him of sexual abuse

Future Of Chillerton And Rookley Primary Once Again Under Spotlight

Bag A Collection Of Collins Books For Back To School

9/11 anniversary: Breaking the news to George W Bush: 'That's when he became the president'

Motorcyclist Taken To Hospital After Incident In East Cowes

Ronaldo may be 36, but his time at Man Utd won't be a short-lived affair

Afghanistan: Taliban fighters claim they 'have changed' and Afghanistan now 'safest country in the world'

Prince Andrew: Duke of York served with legal papers for sexual assault lawsuit, according to US court document

9/11 anniversary: Twenty years on, US and the world face a painful reflection of a life-changing moment

Boris Johnson to pay tribute to victims on 20th anniversary

9/11 anniversary: Who were the September 11th attackers and what are the links with the new Taliban regime?

Emma Raducanu: The 'celestial talent' from Bromley who is making history

COVID-19: PM to repeal parts of Coronavirus Act that are 'no longer necessary'

COVID-19: On this wall, there is one heart for every Briton who died from coronavirus. But now, they are starting to fade

Mountbatten's Walk The Wight Goes Ahead After Volunteers Step Forward

COVID-19: Boris Johnson prepares to reveal winter plan based on vaccines not lockdowns

Prince Andrew: US court to hold pre-trial hearing for sex assault claim against Duke of York

Travel: All You Need To Know Ahead Of Isle of Wight Festival Returning

£14,000 Raised For Wessex Cancer Trust After 35 Brave The Solent

Emma Raducanu makes parents 'proud' with US Open win: 'They're my toughest critics'

Just One Hovertravel Craft Will Run Over The Next Two Weeks

COVID-19: Boris Johnson to unveil winter plan warning 'the pandemic is far from over'

COVID-19: What is the case for booster coronavirus jabs?

Isle Of Wight Festival: All You Need To Know About Changes To Council Services

Ladies Realm To Close Shops Permanently In Ryde And Sandown

'Minor' Changes Being Made To Ryde Interchange Plans Sees It DELAYED

COVID-19: Over-50s and care workers among those to be offered booster jabs from next week

COVID-19: Who will be first to get a COVID booster jab

COVID-19: People flooding back to work could cause spike in coronavirus cases

Afghanistan: Women in fear as Taliban go door to door in search of those who worked for 'enemies'

Three Arrests Made Following Investigation Into Drugs On Isle Of Wight

'COVID is still out there': PM says our position is 'challenging'

Walk-Ins Advised Not To Come To St Mary's Hospital Today

COVID-19: Why has the UK vaccine rollout slowed and which countries have overtaken it?

Javid defends maskless cabinet meeting after government advised their use

Shamima Begum: Runaway IS bride from London sorry 'from the bottom of my heart'

Isle Of Wight Festival Boss: "We Can't Wait To Welcome Everyone Back To Seaclose Park"

Alex Murdaugh: Lawyer accused of arranging own shooting for $10m insurance payout months after murder of wife and son

Heavy Traffic In And Out Of Newport

Boris Johnson's cabinet reshuffle: Who's in and who's out as prime minister changes his top team

Cabinet reshuffle: Liz Truss 'delighted' to be promoted to foreign secretary as two of four top jobs go to women

COVID-19 vaccine 'disrupted the periods of thousands of women'

COVID-19: Mandatory vaccination for care workers is 'damaging a sector already on its knees'

SpaceX launch: Four citizen astronauts blast off on three-day journey, and will orbit Earth every 90 minutes

COVID-19 UK daily tracker: What is the state of the pandemic near you?

What Time Will The Red Arrows Fly Over The Isle Of Wight Festival?

One Step Forward For Isle Of Wight's Fight Against Climate Change

COVID-19: Major changes to travel rules could be announced tomorrow

COVID-19: Major changes to travel rules could be announced today

Prince Andrew accused of playing game of 'hide and seek'

Ramblers Get Set For Isle Of Wight Walking Festival's 100 Walks

Good University Guide: For the first time ever, Oxford and Cambridge miss out on top spot in rankings

Texas begs for help as 10,000 migrants camp in squalid conditions under US-Mexico bridge

with 12 to 16-year-olds getting different combinations in study

COVID-19: Major changes to international travel rules and 'reduced costs' to be announced

Prince Andrew: Photo of legal papers being posted to the duke released by lawyers for Virginia Giuffre

COVID-19: Life-saving antibody treatment to be rolled out across UK from next week

and what are their travel restrictions?

Pentagon admits Kabul drone strike that killed 10 civilians, including up to 7 children, was a 'tragic mistake'

COVID-19: Unvaccinated students urged to get a coronavirus jab during freshers week

REVEALED: Isle Of Wight's Hopes Of Being Carbon Neutral By 2040

Isle Of Wight Festival: What's On Over The Weekend Of 'Peace, Love and Understanding'

France: AUKUS submarine deal has caused one of the gravest rifts among Western allies in living memory

COVID-19: Booster jab invitations to be sent out across England this week

COP26: Boris Johnson to travel to UN and White House to push for climate action ahead of crunch summit

Isle Of Wight Produced Dairy, Tomatoes And Eggs Prove Most Popular With Shoppers

COVID-19: Booster jab invitations to 'strengthen wall of defence' will be sent out across England this week

John Challis, who played Boycie in Only Fools And Horses, has died, his family says

COVID-19: Top scientist says ministers should have improved PCR testing system rather than 'abandoning it entirely'

Jimmy Greaves: Tributes pour in for Tottenham and England legend

Lebanon crisis: Father of girl with cancer says economic crisis is hitting hospitals and food supplies: 'There's no money and no work'

Nazanin Zaghari-Ratcliffe's husband 'not very confident' of breakthrough in case

Energy crisis: How long will it last and what happens if your supplier goes bust?

Capsized Catamaran In Danger Prompts Call Out For Cowes RNLI

Derbyshire deaths: Dad's tribute after his two children, their mother and friend 'on a sleepover' are killed

Energy price crisis: What can I do to shield my family from surging bills?

Princess Beatrice 'so delighted' after giving birth to a daughter

COVID-19: US to relax travel rules for vaccinated passengers from UK and EU

Conditions Could Be Lifted On Controversial Homeless Hostel In Newport