For growth, revive the spirit of entrepreneurship

Opinion: A new low in government customer service and efficiency

Letters to the Editor

What are mangroves and why are they the key to saving the planet?

Polling for 5th phase of Bengal election on, fate of 342 candidates to be sealed 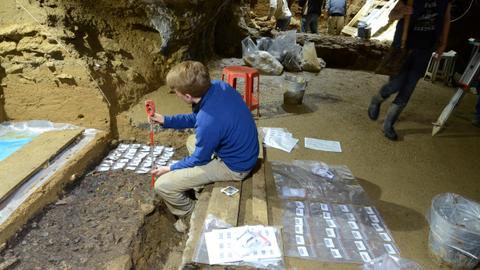 Researchers detect a genetic contribution from East Asia rather than Europe as they discover 3 to 3.8 percent Neanderthal DNA from the remains of three people, who lived roughly 45,000 years ago.

DNA extracted from remains found in a Bulgarian cave of three people who lived roughly 45,000 years ago has been revealing surprises about some of the first Homo sapiens populations to venture into Europe, including extensive interbreeding with Neanderthals and genetic links to present-day East Asians.The three Bacho Kiro cave males represent the oldest securely dated Homo sapiens individuals from Europe.READ MORE:  Scientists set eyes on Neanderthal 'brain' Interbreeding, known as admixture, between Homo sapiens and Neanderthals before the extinction of Neanderthals sometime after 40,000 years ago has been previously shown, with present-day human populations outside Africa bearing a small percentage of Neanderthal DNA.The prevalence of this interbreeding and the relationship and power dynamics between Homo sapiens and Neanderthals has been harder to understand – including any role our species played in the demise of the Neanderthals.

Can you mix and match Covid-19 vaccines?

Can the US exit Afghanistan?

Apple to make privacy notification mandatory on next iOS update

Mozambique will need more than military might to fight insurgency

Fighting halts in Sudan’s Darfur but deaths soar beyond 130

Who are the celebrities in crosshairs of Myanmar junta?

Syrians reject Denmark's claim that Damascus is safe for their return

Prince's 'Welcome 2 America' album due in July, five years after his death

Hospitals in Philippines capital struggle to cope as virus surges

The Quran controversy in India is a political ploy, nothing more

How the world reacted to Prince Philip's death

Once a former US informant, today the leader of Daesh

China looks at option of mixing vaccines to improve efficacy

Lockdown imposed in Pakistan ahead of Ramadan – latest updates

UNESCO need to look at Karabakh without being hypocritical – Turkey

Inter Milan near Serie A title victory with win over Cagliari

Syria's largest camp for Daesh prisoners is a recipe for disaster

France seeks to ban the Algerian flag in wedding ceremonies

Why are cryptocurrencies booming in Turkey?

Navalny to sue Russian prison for denying him a Quran

Biden team has 'sincere belief' that Austin Tice is alive

Turkey is strongest maritime force in the region

Is it time to redraw borders in the Balkans?

Lebanon is already past the brink of collapse

'Black Panther' sequel to be shot in Georgia despite voting law