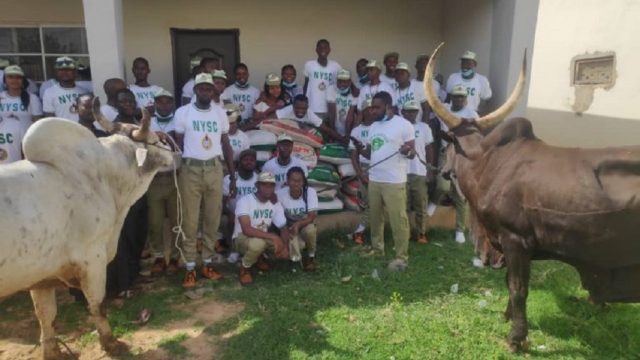 President Muhammad Buhari, on Tuesday, in Daura donated N1million, two cows, and 20 bags of rice to National Youth Service Corps (NYSC) members serving in Daura Local Government Area of Katsina State. Mr. Alex Obemeata, NYSC’s spokesperson in Katsina, who disclosed this in a statement on Tuesday, said the President’s gesture was delivered to them […]

“It was another joyous Sallah day for the corps members serving in Daura, the country home of Mr President, as he was at home for the 2021 Sallah celebration.“Usually, when Mr President is at home for Sallah celebration, corps members go to his house to welcome him and wish him ‘Happy Sallah’.“In like manner, on July 20, 2021, the corps members in Daura were at the President’s house for the Sallah wishes, and it was a celebration of the century.Alex Obemeata, NYSC’s spokesperson in Katsina, who disclosed this in a statement on Tuesday, said the President’s gesture was delivered to them when they visited him in Daura to celebrate the Eid-El-Kabir.

According to Obemeata, the State Coordinator, Alhaji Ahidjo Yahaya, on behalf of the NYSC Director-General, Brig-Gen Shuaibu Ibrahim, thanked the President for the gesture.He said that the President commended the NYSC members and urged them to be good ambassadors of their country and committed towards the development of Nigeria.