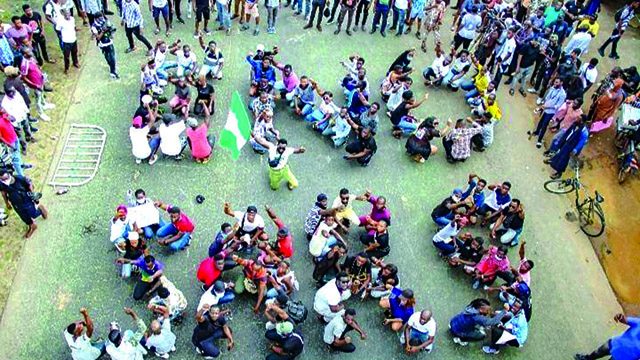 Cyber Warfare Operation Starts On Tuesday • Army Must Tread With Caution In Dealing With Protesters - Shehu Sani • Violent Reprisal Of Peaceful Protests Dangerous, Says CSOs • Northern Coalition Seeks Campaign Against Insecurity In the North • It’s Time To Return Home, APC Stakeholders Beg Protesters • World Igbo Congress Expresses Solidarity With Protesters • Ohanaeze Youth Council Demands Release Of Igbo Youths Wrongly Incarcerated By SARS • Call For Buhari’s Resignation Unacceptable, Politically Instigated, Says NDF The Federal Government may have finally yielded to the temptation of quelling the ongoing #EndSARS protests via military might, in the guise of Exercise Crocodile Smile 6, which the Nigerian Army, yesterday, announced will commence on Tuesday, October 20.” IN the same breadth, a group of civil societies in the country has warned the Federal Government against using the military to quell the ongoing nationwide protests.The coalition, which addressed a press conference at Arewa House, Kaduna at the weekend, also asked the Federal Government to deploy same energy used in the disbandment of SARS to end insecurity in the North.As a result, we have itemised some of our demands to the Federal Government and to the protesters as well.

“OYC appeals to President Muhammadu Buhari-led federal government and IGP to either charge them to a court or unconditionally release them from detention to reintegrate with their families.The NDF alleged that the peaceful protests have been hijacked by “crisis entrepreneur” aiming to trigger the second phalanx of the attack on the Federal Government, by creating the impression of widespread discontent.