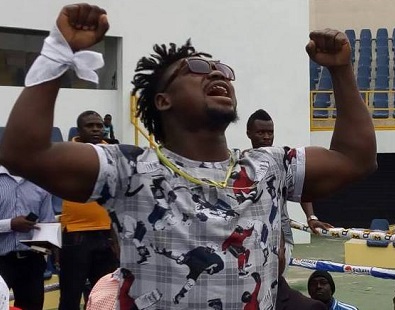 • The Beast (left) dishing it out to Bukom Banku Ghanaians also opined that Bastie, known as the ‘Beast’, would shoot into global prominence and possibly draw some big fights that should culminate in a world title shot.Times Sports: After demolishing BukomBanku, that propelled you to instant fame and afforded your career a strong launching pad, many expected you to have inched closer to a world title shot by now.As I speak now, I’m rated 15th in the WBA light heavyweight division, which means that after two or three successful fights or so, I can get a shot at the title.BS: Hopefully, if all things go as planned, we should be getting close to a title shot as I’m eager to win all bouts that come my way.

• Bastie Samir When Bastie Samir dominated and knocked out the enigmatic BraimahKamoko (BukomBanku) in the seventh round in that epic boxing tie at the Bukom Boxing Arena on October 21, 2017, many Ghanaians were deep in their conviction that the victory would catapult the winner to instant fame.Are you sure you can win a world title before hanging your gloves?