‘I’m a Dermatologist, and These are the 4 Myths About Wrinkles I Hear Most Often’

Dave Grohl Goes on the Road in 'What Drives Us' dcoumentary 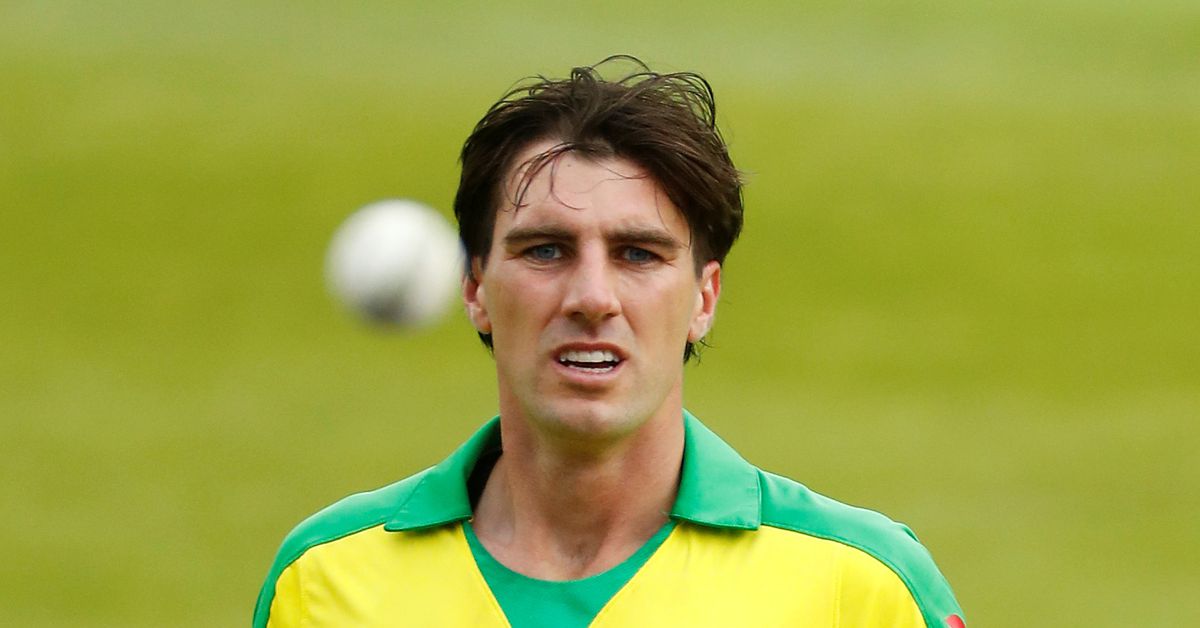 The ban on travellers from India by Australia had added "anxiety" for its cricketers after the Indian Premier League's (IPL) suspension, Australia vice captain Pat Cummins said, as players isolated in the COVID-ravaged Asian nation on Wednesday.

read more IPL organisers and the Indian cricket board (BCCI) have said they will help players, staff and officials get home safely.The country's cricket board said it was liaising with authorities to work out an exit plan.read more Australia fast bowler Cummins is isolating in an Ahmedabad hotel after two of his Kolkata Knight Riders team mates contracted COVID-19 before organisers pulled the plug on the tournament on Tuesday.read more Indian media reported that the Chennai Super Kings' Australian batting coach Mike Hussey had contracted COVID-19.

read more Cummins said Australia's travel ban, which will be reviewed on May 15, had come as a "little bit" of a shock."I probably feel that they're a little bit late in considering that.

Australia to spend $1.3 bln on childcare, enticing women back to work

Bulgaria to ease some COVID-19 rules, restaurants closed for now

Denmark to open borders to EU/Schengen countries from May 1

IBM to acquire software provider Turbonomic for over $1.5 bln

Macron's party teams up with conservatives for regional elections in south

Lithuania to start supplying LNG to Poland next year

Saudi Arabia to open land, sea, air borders as of May 17 - ministry

With stories and puppets, environmentalist battles to save Indonesia's mangroves

English music-lovers party like it's 2019 at COVID pilot festival

Pfizer to supply 4.5 mln doses of COVID-19 vaccine to South Africa by June

'You can't clone us': Polish doctors cry for help as COVID deaths spike

UPDATE 4-Australia's Westpac earnings more than triple, cost base to fall 21% by 2024

Online share of retail sales jumps to 19% amid lockdowns - UN

European shares rally as investors begin May in bullish mood

No grounds to pursue claims of French role in Rwanda genocide, prosecutor says

Philippines to start clinical trials on ivermectin, other drugs for COVID-19

U.S. and South Korea reaffirm their alliance at London meeting

Top Photos of the Day

Fully vaccinated Germans to be exempt from quarantine - minister

Pioneering the future of flight

U.S. did not carry out attack on Iranian vessel -officials

Most capacity limits to end in New York, New Jersey and Connecticut on May 19

Andrew Brown, Black man killed by police in North Carolina, to be laid to rest

Sticking with remote work? Businesses are betting on it

Fact Check-McDonald’s in Elkton, Maryland is not under investigation for sex trafficking

Indonesia May coal benchmark price up 3.5% on Asian economic recovery

Not a god: Taiwan defends health minister amid uptick in COVID cases

Italy could be vaccinating 1 million people per day by end-May: AIFA head to paper

Swiss embassy employee in Iran dies in fall from high-rise

Lebanon's Hariri: Pope to visit if government is formed

UK mortgage lending rises by most on record - BoE

G7 mulls a message to China: the West ain't over just yet

Factbox: Reaction to suspension of IPL due to COVID-19 crisis

Foreign players seek way out of India after IPL suspension

A high-altitude clean-up in Bolivia's Valley of the Souls

IPL suspended due to COVID-19, foreign players fret over return

Biden to set goal for 70% of U.S. adults to have one shot of vaccine by July 4

European shares dragged down by tech's worst day since October

Conoco says all staff safely evacuated from drillship off Malaysia

Motor racing-Monaco to allow spectators at Formula One Grand Prix

WIDER IMAGE In COVID-hit India, a 26-year-old doctor decides who lives and who dies

RPT-Ecuador's Lasso has 54% of votes in presidential runoff: preliminary data

Factbox: Scottish election: how it will work and what to watch.

Trump still banned from Facebook but board calls for company review

Factbox-Election day: What are Scotland, England, Wales voting for?

U.S. trade chief Tai says 'time is of the essence' in addressing vaccine waiver at WTO

Factbox: Who are the first members of Facebook's oversight board?

Factbox-What is Facebook's oversight board?

Fed's Rosengren says it is premature to talk about tapering

Capital Calls: GM is a wannabe speedy that is stuck in slow lane

U.S. crude stockpiles slump after a surge in exports -EIA

Russia to limit staff at embassies and agencies of 'unfriendly' countries

Indian board says it faces $270 million hit from IPL suspension

Exxon expects $200 mln in charges this year for job cuts

US STOCKS-Dow ends at record high as tech slides

Marathon Petroleum probing cause of chemical release at Texas refinery

Qantas to keep headquarters in Sydney after property review

Meatless Manila IPO offers something to chew on

Tokyo set to seek extension of emergency until May 31

NATO head calls on Russia to de-escalate in Ukraine crisis

Australia calls for release of 3.1 mln vaccine doses, if EU not blocking exports

Germany will do its best to enable responsible summer holidays - minister

UK says 4.2 million jobs on furlough at end of March

Moody's places Nigeria's First Bank on review for downgrade after c.bank sacked board

French presidency: in our interest that Jersey situation does not worsen

Staycations to vacations: All eyes on summer bookings at IHG's Holiday Inn

Marathon Oil says no plans to 'indulge' in expensive M&A

Lebanon's lights may go off as cash for electricity runs out

HIGHLIGHTS-BoE press conference: Don't get carried away by recovery

GRAPHIC-Up, up and away: Emerging market central banks raise rates in April

Germany's Maas: We can talk vaccine patents, but priority is boosting supply

With 8 mln Americans out of work, why are more companies not filling jobs?

Immigration in focus at high level U.S.-Mexico talks on Friday

Brazil's Eletrobras to be privatized by January 2022 -economy ministry official

Analysis: How Biden plans to add $600 billion to the U.S. 'care economy'

Photos of the week

Gulf states and Iran should agree on format for dialogue, says Qatari minister

Wall Street's worries shift away from the pandemic - Fed survey

UPDATE 2-El Salvador not in talks with China over loan deal, minister says

Don't get carried away by UK recovery, BoE's Bailey warns

Guinea gets donation of 200,000 COVID-19 vaccine doses from China

Japan government set to extend state of emergency to May 31

Russia calls US an adversary, warns its warships to avoid Crimea

Unused COVID shots piling up in Japan amid slow rollout

UPDATE 1-Klepierre flags reopening of stores as it trims guidance

FTSE 100 set for best week since April on recovery hopes

"My life for his": Thai mothers fight for activist children charged with insulting king

Lufthansa to resume flights from Frankfurt to Tehran this month

Saudi to make COVID-19 vaccinations mandatory for all workers

How confusion around Biden policies birthed a new refugee camp on the U.S. border

Iran's Khamenei says fight against Israel is a public duty

Analysis: Out of power in Washington, Republicans pursue hard-right agenda

UN says armed attacks in Burkina Faso displace over 17,500 in past 10 days

Public Health England says coronavirus variant B.1.617.2 is a variant of concern

FOREX-Dollar near one-week low ahead of U.S. jobs data

Factbox-Latest on the worldwide spread of the coronavirus

27 hours: a life-and-death shift with a young doctor in COVID-hit India

Bank of England does not see COVID bankruptcy wave - Haldane

ANALYSIS-Europe's consumers face rising prices but the ECB is unfazed

AIG says it will use IPO to sell life and retirement unit; 'pivots' to growth

Five EU countries say focus should be on vaccine production, not patents

Special Report-He returned to Iran to help save its environment. He had to flee

WHO hopes Olympics can go ahead, up to Japan to manage risks

Tears and singing as abducted Nigerian students return to parents

Column: Lead and zinc miss out on the supercycle party - Andy Home

Indian board yet to discuss IPL offer from English counties

U.S. President Biden says he is confident he can meet Russia's Putin soon

Sinopharm vaccine gets WHO nod in potential boost to COVAX pipeline

U.S. proposal would crack down on anonymous ‘ghost guns’

EU calls on U.S. and others to export their vaccines

A year after the loss of its founder, Susman Godfrey keeps moving forward

NZ's Seifert tests positive for COVID-19, Williamson and others moved to Maldives

EasyJet sees Europe open for travel from late May

China administered total of 308.23 mln doses of COVID-19 vaccines as of May 7

Turkey COVID cases below 20,000 for first time since mid-March

SAfrica picks up first cases of coronavirus variant from India

Asian shares jump on hopes for low rates, oil up on cyber attack

Fire breaks out on tanker near Syrian coast

S.Korea's Moon says 'time to take action' on N.Korea ahead of summit with Biden

Eleven killed as bomb blows up a bus in Afghanistan - officials

Rescuers save small whale stranded in the Thames

Fatigue a 'good problem' to have, says Barty

Uzbekistan to stage AFC Champions League Groups H and I

Euro zone bond yields head back up after post-payrolls swings

Gunmen kill eight in ambush on passing cars in Burundi

Japan's Shionogi may roll out COVID vaccines this year -Kyodo

Portugal's CGD bank is relaunching the sale of its Brazilian unit, board member says

After virtual Berlin Film Festival, movies to be shown outdoors

Airbus puts supply chain executive at helm of loss-making A220

Pandemic plateauing with deaths and cases declining - WHO

Uzbek blogger given 6.5 years in prison on libel, extortion charges

UN investigator says he has evidence of genocide against Iraq's Yazidis

Man City made to wait for title by Chelsea, Liverpool boost top-four hopes

At least one killed, two injured in large Kazakhstan wildfire

METALS-Copper slips amid investor jitters after rallying to peak

Lockheed Martin removes contractors from Iraq base over security fears

Minke whale calf put down after getting stranded in London

UK government kicks off sale of 5% stake in NatWest

U.S. Treasury opens $350 billion in COVID aid, some states won't get full funds for a year

UPDATE 1-S.Korea May 1-10 exports surge in boost to economic recovery

"Do you want Tesla to accept Doge?" Musk asks on Twitter

COVID certificate will be a signal for travel in EU, Germany says

Dine-out, work out, see a movie: Belgium to ease lockdown on June 9

'End is in sight': tackling a rare disease in a global pandemic

FEATURE-'I have no more tears': A Latin American pandemic tragedy

South Africa's manufacturing output up 4.6% year on year in March

Mexico says US ready to share AstraZeneca vaccines after testing them

Syria releases hundreds of social media critics ahead of election

Explainer-What is LGBT+ conversion therapy and why is it so controversial?

UK calls on EU to show pragmatism over N.Ireland trade

Iran has enriched uranium to up to 63% purity, IAEA says

UK shares drop the most in 7 months on inflation woes; THG shines

Bank of England warns over easy alternatives to Libor

Lex Greensill on ex-UK PM Cameron: I wouldn't say we were friends

IN BRIEF: Elliott makes winning bid to buy Paper Source out of bankruptcy