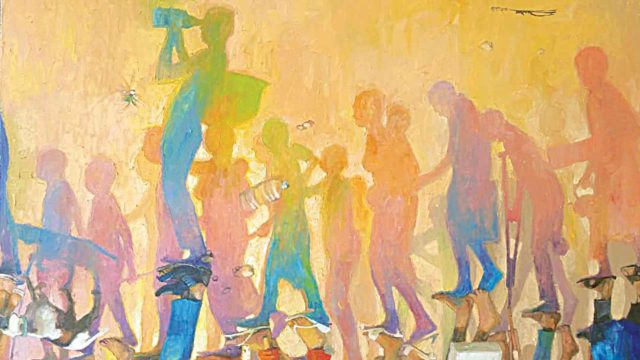 For the second time, Dudu brothers, Emmanuel and Stanley, share a space in common, showing paintings of oil and pastel. In 2013, the brothers

In 2013, the brothers had a two-artist show, Meet the Dudus, at Alexis Galleries, Victoria, Island, Lagos, but Stanley retuned to the same space a year later for a solo titled, Next Episode.Seven years after, art lovers and connoisseurs have something fresh to savour when the artists’ new show, Meet The Dudus II, opens, virtually, from September 26 to October 3, 2020.” Stanley’s journey through the phases of mastery of monochromatic texture keeps pulsating, so assert some of his works for Meet The Dudus’ II exhibition.From strictly black and white to mixed colour, some of the works bring surreal tone into his compositions, combining monochrome and colour, in one piece.

Interestingly, it also injects a kind of surreal texture: a blue plate of brownish kola nuts and dark skinned fishes, all in the midst an entirely black and white space create depth of theatrics in visual rendition skills.Still flaunting his skills in the aesthetics of coalescing black and white with colour elements, which creates collage-effect, Stanley leaves the city.