In defence of white women

The persecution of Kathleen Stock

At least 20 killed in Somalia as army, militia clash

The anatomy of a media smear

punjab: Punjab must come back to 'real issues' that concern every Punjabi: Navjot Singh Sidhu

'The best job in the world': Dietitian for NBA's Timberwolves is Mount Saint Vincent grad 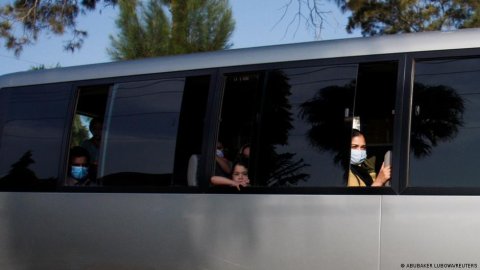 The first batch of Afghan evacuees fleeing the Taliban takeover has arrived in Uganda. They will receive temporary refuge before relocating to the US. Some Ugandans, however, are concerned about their country's security.

It is the first batch of the 2,000 Afghan refugees expected to be resettled in Uganda.Professor Mwambutsya Ndebesa, a historian and lecturer at Makerere University in Kampala, told DW that Uganda could attract unwanted attention from terrorist groups by hosting Afghan refugees."Afghan refugees may turn the attention of international terrorist groups such as al-Qaeda, al-Shabab, and ISIS to Uganda and destabilize the country," he said.He is worried that the deal hatched between the United States and Uganda's President Yoweri Museveni to host the Afghan refugees could dent relations between Afghanistan and Uganda.

Ugandan political scientist Ndebesa also underscored that the deal to host Afghan refugees would only serve to boost Museveni's image abroad.Despite such concerns, some ordinary Ugandans have welcomed the decision to resettle Afghan refugees in Uganda.

Italy: Three men arrested after attack on migrants in Foggia

'My daughters were granted asylum': An Ivorian father in France says his situation improved

Poland seeks extension of state of emergency on Belarus border

Migrant child dies in Lithuania after heart and lung problems

France to prolong social benefits for children after they turn 18

Fire in migrant camp in southern Italy, one dead

Belgium: What do you need to do to reside legally in the country?

5,000 migrants helped to get Green Pass in southern Italy

UNHCR urges increase in scope of humanitarian aid in Syria

'I learned to add butter and remove chili': In France, refugees train to work in restaurants