Air Pollution Kills Almost Half a Million Babies Around the World

All or nothing at all?

Manchester Tier 3 start: How long will Manchester be in Tier 3?

Denel can be repositioned – Sadik

Argentina eyes boost in gas production through $5B investment

'Threshold' opens at The Arts Center 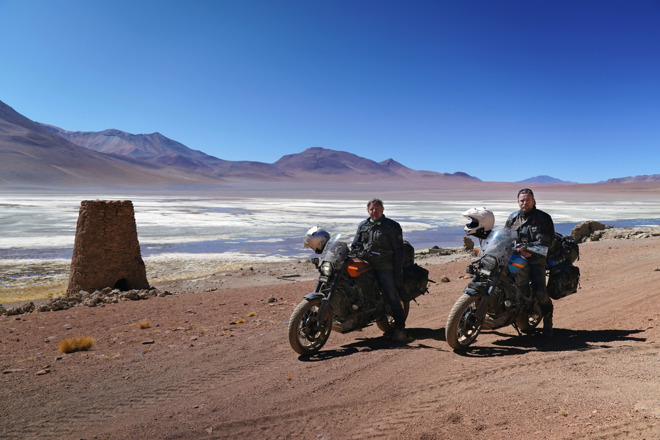 Apple TV+ review: Ewan McGregor goes electric in engaging 'Long Way Up' AppleInsider Posted: September 18, 2020 11:09AM in iPod + iTunes + AppleTV Ewan McGregor and his TV host friend, Charley Boorman, take another of their famously very extended motorcycle trips, this time in Apple TV+'s first travel show.Ewan McGregor and Charley Boorman in "Long Way Up," premiering globally September 18 on Apple TV+.Long Way Up is Apple TV+'s first stab at an Anthony Bourdain-style adventure travel show, and they've certainly gone big with it.They started with 2004's Long Way Round, which aired on the UK's Sky 1 channel, and followed it Long Way Down, which was shown on BBC2 in 2007.

Like those, the success of Long Way Up is down as much to charismatic McGregor and his likable sidekick Boorman, as it is the scenery.The first three episodes of Long Way Up premiere on September 18, with the remaining seven debuting each Friday through November 6.

Online Apple Store to launch in India on Sept. 23

How to use the new App Library in iOS 14

How to hide app home pages on iOS 14

Apple has bled more than $500B in market value in September

How to use Scribble on iPadOS 14 on your iPad

How to use the Handwashing feature on the Apple Watch

Flash deals: open box iPads and MacBooks drop to as low as $289

Hands on with the new features of Apple Watch Series 6

How to use the Translate app in iOS 14

Apple could use 'iPhone 12 mini' name for smallest 2020 model

What the 'Time Flies' event gave HomeKit users, plus a studio update, and more on HomeKit Insider

Best prices: new iMacs are up to $410 off right now

Review: Logitech MX Anywhere 3 is tailor-made for the work-from-home era

How to use the new Messages features in iOS 14

What the 'Time Flies' event gave HomeKit users, plus a studio update, and more on HomeKit ...

How to customize your Home Screen on iOS 14

How to use App Clips in iOS 14

Apple ranks number one in consumer satisfaction in personal computing

How to use the new Control Center features in iOS 14

How to use Apple Watch without Force Touch in watchOS 7

Developers can now build and run Swift code on Windows

How to translate languages in Safari in iOS 14

How to use Enhance Recording in iOS 14 Voice Memos

Echelon 'Prime bike' has nothing to do with Amazon, and has been struck down

How to hide photos and albums in iOS 14

Microsoft teases Office for Mac update to be available without subscription

Buy the dip in AAPL ahead of 'iPhone 12' launch, says Morgan Stanley

How to use Universal Search in iPadOS 14

Xbox app that can stream games to iPhone is 'coming soon'

Review: The Keychron K2v2 is a good upgrade to an already near-perfect keyboard

How to customize your Apple Watch face in watchOS 7

Review: PaMu Quiet TWS earbuds are an ear-friendly alternative to other noise-cancelling earphones

How to add and remove Apple Watch faces in watchOS 7

Review: PaMu Quiet TWS earbuds are an ear-friendly alternative to other noise-cancelling e...

TikTok attorneys argue against US app ban in last-ditch effort

How to use the new compact Siri in iOS 14

Uber to get a new licence to operate in London

AirPlay 2 and HomeKit support coming to Roku in 2020

Google Stadia can be used on the iPhone now, with the Stadium browser

How to use Apple Maps Guides in iOS 14

Widgets are not stealing your data or logging your keystrokes in iOS 14, because they can't

Future iPhones could use laser detection of poisonous gas, air quality, or pollen

Widgets are not stealing your data or logging your keystrokes in iOS 14, because they can'...

How to use Siri's new queries in iOS 14

EU could force Apple to share user data with competitors

Tightened restrictions on Huawei smartphones could boost the iPhone

AMC+ launches on Apple TV Channels for $8.99 per month

Blowout deals: save $550 on this loaded MacBook Air, $600 off with AppleCare

Apple TV+ review: 'Tiny World' gets back to nature, with Paul Rudd narrating

How to connect external storage to your iPad in iOS 14

Flash deal: save 50% on Nomad USB-C to Lightning cable with Kevlar

First benchmark indicates A14 is major upgrade from A13

No 'iPhone 12,' but new iPads, Apple Watches, and antitrust battles

Disney movies pop up in 4K HDR in iTunes

Breaking down the Coalition for App Fairness' issues with Apple

Review: Corsair TBT100 is a reliable Thunderbolt 3 dock in a competitive market

Apple releases teaser for 'Bruce Springsteen's Letter to You' documentary

Apple leadership reap up to $60M each in vested stock bonus

Apple's smart rings could recharge in an AirPods-style case

How to use the new CarPlay features in iOS 14

Apple Mac perceived as easier to use, more secure than Windows among IT departments

Review: Apple Watch SE is the smartwatch for first-time buyers and upgrade-holdouts

Leaker claims 'HomePod mini' is coming, 'HomePod 2' is not

Give up analyzing Apple's 'Hi, Speed' invitation for clues

Apple customers have the most emotional connection to the brand versus others, study shows

'iPhone 13' will have a smaller notch according to known leaker

Apple working on embedding sensors behind a display, resulting in smaller bezels

Apple applies for 'iPhone for Life' trademark in Hong Kong

Apple working on how to securely present electronic ID wirelessly

Microsoft to adopt app store guiding principles for Windows, but not Xbox

Review: SanDisk Extreme Pro V2 is the SSD we pack in our bags

Face ID in 'iPhone 12' may gain speed alongside camera enhancements

Spotify threatening developers over apps that transfer playlists to other services

Disney to focus on streaming as part of major reorganization

New 'HomePod mini' and Apple TV will track your location for HomeKit, AR

Apple Store down ahead of 'iPhone 12' debut event

MagSafe-compatible PopSockets are coming to iPhone 12

Apple may be launching Apple Pay in Mexico very soon

What MagSafe on the iPhone 12 is, how it works, and what can it do

Apple will continue including EarPods with iPhone 12 in France

How to get an iPhone 12 with Apple's iPhone Upgrade Program

Apple's research of Apple Watch charging coil use for haptic feedback could lead to thinne...

Online Apple Store down ahead of iPhone 12, iPhone 12 Pro preorders

Review: Lander Argo offers 360-degree protection for your Mac on the go

True Tone for MacBook Pro keyboard may use multiple LEDs

Canada could soon get the revamped and redesigned Apple Maps service

Review: DJI's updated Pocket 2 is a must-have tool for the on-the-go video creator